The Congress of progressive political parties (COPPP) which is a conglomerate of political parties has suspected the Electoral Commission of Sierra Leone (ECSL) to create new constituencies base on the results of the controversial midterm census.

The suspicion came after ECSL announced the date for conduct of voter registration ahead of the June 24th 2023 general elections.

To that end COPPP has written a press release to draw the attention of the public and the international community on the intended foul play by ECSL.

Below is the press release:

The attention of the membership of the Consortium of Progressive Political Parties (COPPP) has been drawn to public notices issued by both State House and the Electoral Commission of Sierra Leone (ECSL) announcing that registration of voters in respect of the 2023 Presidential, Parliamentary, Local Council and Village Head Elections shall be done from 3rd September 2022 to 4th October 2022 and that the Presidential, Parliamentary and Local Council elections will be conducted on 24th June 2023.

COPPP is extremely grateful for all those concerned parties, both local and international, that have in one way or the other contributed to the release of these dates, thereby removing the uncertainties and reducing the political tensions caused by suggestions from highly placed personalities about a possible postponement of these elections to 2024.

Now that the dates are out, COPPP would like to refer the Chairman and other members of the Electoral Commission to section 32 (11) of the 1991 Constitution of Sierra Leone:

“In the exercise of any functions vested in it by this Constitution, the Electoral Commission shall not be subject to the direction or control of any person or authority.”

Furthermore, in Section 3 of the 2012 Public Elections Act it is clearly stated that “By virtue of subsection (11) of Section 32 of the Constitution, the Commission is an independent body.”

This means that the ECSL has an obligation of service to the State and the sovereign will of the people of this country as embodied in the Constitution and not in any way to the particular interests of the Government in office.

Against this background, we consider it to be alarming and a matter of national security concern that the ECSL in the past week has been sending signals, through its engagements with the press that it is considering boundary delimitation before the 2023 general elections based on the anticipated results of the just concluded catastrophic mid-term census.

It is a well-known fact that this census was overwhelmingly rejected by the majority of Sierra Leoneans as indicated by the abysmally low level of public participation. Furthermore, the entire process was marred by so many irregularities including grave technical inadequacies and capacity issues that even the World Bank had to withdraw its support. It is obvious that the data derived from this botched census are contestable, unreliable and therefore un-usable especially in such an important public exercise as a general election. However, Statistics Sierra Leone (SSL) seems to be hell-bent on using its highly questionable mid-term census population figures to support the SLPP Government’s plans to draw up new boundaries and create new constituencies so as to give it undue advantage over opposition parties in the forthcoming elections.

When SSL launched the mid-term census, the Statistician General maintained that the purpose of this census was to provide data that will make service delivery to communities more effective.

However, COPPP insisted at the time that rather than development, the real objective of the census was to hastily produce dubious population figures that would assist the SLPP Government in its efforts to cling to power in spite of their unprecedented unpopularity. COPPP’s fears were confirmed when the Electoral Commission published its 2020-2024 Strategic Plan, indicating that although the Commission’s calendar provided for boundary delimitation to be done in 2024, it could happen before the 2023 election if necessitated by the mid-term census results.

Now that the census has proved to be a sham, it will be treasonous for whatever results are obtained thereof to be used to corrupt and undermine the integrity of the ongoing electoral process. And certainly, opposition parties using COPPP as a platform will not be ready to allow the next general elections to be seriously compromised right from the start with the introduction of new boundaries that are based on the results of the most controversial and rejected census in the history of Sierra Leone.

In conclusion, the Chairman of the Commission is reminded of his oath of office, his sacred duty to the country and his responsibility to conduct free, fair, transparent and credible elections that will ensure the stability and security of the State through peaceful democratic transitions.

Orange SL has on Wednesday unveiled the Fourth  edition of their Orange Social Venture Prize (OSVP) with ‘Orange Tech Queen’ as the theme for this year.

It is open to all Sierra Leoneans who have attained age 21 and above, have bank accounts, must not be an Orange staff among others.

Le100m is meant for the general prize and Le50m for the women’s category.

At the launching ceremony, the head of public relations at Orange Sierra Leone, Annie Wonnie Katta said Orange’s desire to be the leading digital partner for start-ups in Africa and the Middle East brought about the OSVP initiative 12 years ago.

The OSVP, she said, aimed at rewarding the best technological project with positive impact and solution to social challenges in the fields of education, health, agriculture, mobile payments or sustainable development in Africa and the Middle East.

“The competition is organized annually in all 17 Orange affiliates in OMEA,” Katta said.

She continued that the three winners from each of the 17 countries get an opportunity to compete in a grand international contest where 1 out of 51 contestants emerges as the winner who bags 25,000 Euros.

Orange Sierra Leone, she went on, joined the OSVP contest in 2019 three years after joining OMEA.

“We have successfully held three national competitions in 2019, 2020 and 2021 Aminata Kandeh won 2019, Bayoh Turay won 2020 and Haja Isata Bah won 2021 awards with hundreds of millions of Leones pumped into their  businesses to make them effective and efficient”. She explained.

Katta further informed the audience that one of the winners, Aminata Kandeh, owned a successful agro-fish farm while Bayoh Turay is gainfully employed as a trainer at Orange Digital Centre where he is offering his expertise in coding and mentorship to young aspiring innovators.

In spite of gains made, Orange is still ready to improve on OSVP for increased relevance.

“Last year, we accelerated the tempo of OSVP with the support of  our partner, Innovation Sierra Leone to bring more meaning to the innovation axis and increased empowerment for young start-ups, innovators and entrepreneurs in Sierra Leone,” Katta lamented.

The 2021 winner, she continued, made it out of 128 applicants with a cash prize of Le100m which she money grow her business.

Isata Bah heads the ‘Uman for Uman,’ a business institution that supports women and girls by ensuring availability and affordability of recycled menstrual hygiene pads.

In the new category, Katta said, Sia Chaywai emerged as the winner with a Le50m grand prize to support the enhancement of her mobile clinic project.

In her statements during the ceremony, the 2019  winner, Aminata Kandeh is highly appreciative of of Orange Sierra Leone’s support to the growth of her business.

“Le100m is a good sum that would  take you a long way. I used the money to increase the one fish pond to two,” she expressed appreciation.

She also spoke about how he developed the initiative to become an entrepreneur that have touched and impacted people’s lives.

Kandeh said she got her first experience working with a fish farm in 2016 after she graduated from Njala University in Moyamba district.

She set up her own fish farm in 2017 following the closure of the farm where she had been working.

The 1, 500 Tilapia fish she got from Makali Fish Station the following year were initially  used to start the farm as a viable business entity. To grow her business to higher heights, Aminata tried her luck under the OSVP and emerged as winner.  Aminata’s business plan was timely since access to healthy fish was a big problem worsened by poor roads network, weak electricity among others.

The other winners, Bayoh Turay and Haja Isata Bah also expressed sentiments of good will for Orange Sierra Leone.

The company would keep eye on the winners to gauge how far they have fared in their businesses. Their aim is to ensure that they become role models in niches they have carved for themselves.

Orange Sierra Leone hopes that with huge businesses successes, others will be inspired.

Managing Director for Innovation Sierra Leone, Francis George mentored the winners to make it up.

In his contribution, George said the digital Eco-system in Sierra Leone must be changed for the country to face the socio-economic challenges confronting her singling out poverty as the main challenge.

“This year, we must have a representative in the global competition taking place in Africa and the Middle East,” George assured. 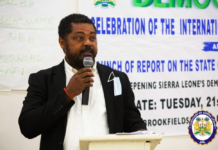 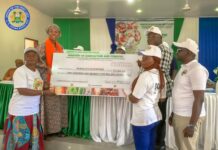