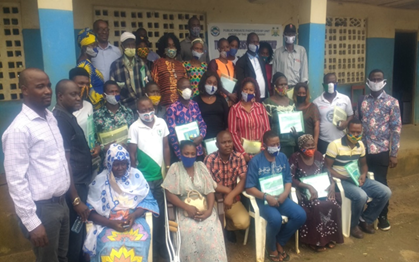 Abu Bakarr Kamara, Director PPPs Unit under the auspices of the Office of the Vice President expounded that the sensitization was a means of soliciting information from targeted communities on how to design, finance, manage and construct a PPPs market model, thereafter, the PPPs will further such report to donors to support the process especially in cash-flow.

Patrick Ajuno Sesay, Programme Manager, said participants in all communities including Tombo, 555, Waterloo Market Square, Jui, Grafton and Regent community markets were fully in gear, and appreciated the initiative, additionally, the Unit as well saw the need that there were a lot of gaps within the visited communities which actually need supports which the PPPs has recorded in a form of report to submit to donors, he noted.

He noted that, failing to invest in infrastructure could lead to failure in growth and developing nation and economic fabric. Instead, the growing interest for PPPs can mainly be interested to tighten budgets, but also to increase project complexity, better value for money, and government desire to influence private sector expertise in order to shift public sector priorities.

Abu Bakarr Sesay, Financial Adviser, PPPs Unit revealed that, with PPPs in communities, markets will be in the position of providing better infrastructure solutions than ingenuity that is wholly public nor exclusively private as well as enhancing faster project completion and reducing time-to-completion as a measure of performance and therefore of profit.

The unit is in befitting to increase the efficiency of the government investment, allow government funds to be redirected to other important socioeconomic areas, it said.

Councilor Mohamed Lamin Kamara of Ward 397 Western Rural district (Grafton) expressed an indebted appreciation that PPPs has added a resourceful means to the lives of many in his Ward.

“Grafton was one of the most vulnerable communities in the entire district which has all set of vulnerabilities including amputee, polio, war-wounded refugee camp and leprosy,” he urged the unit to lay more emphasis in his ward. He asked government through PPPs to give decorative face to Grafton, because the community has all it takes to accommodate development, with sustainable market structure, it could enable them to boost their business.