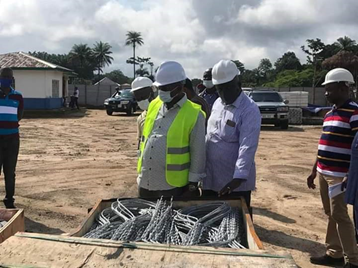 The Minister of Energy, Alhaji Kanja Sesay, has officially received and presented to the people of Bo and Kenema the second and third consignments of materials for the Bo-Kenema Network Rehabilitation and Expansion Project. The minister also took pressmen and stakeholders on an inspection tour of the warehouse at Yamandu -a strategic town sandwiched by the cities of Bo and Kenema.

President Bio has shown that he is committed to fulfilling his campaign promise of providing adequate, reliable and sustainable power supply nationwide, to stimulate economic development through the consolidation, improvement, and expansion of existing and potential energy supply infrastructure. The Bo-Kenema Network Rehabilitation and Expansion Project is a mega energy project which aims at completely overhauling the network and distribution systems in the two cities for the purposes of evaluating quality electricity to households. The project will also seek to expand the grid and have new or emerging settlements connected.

On Wednesday 24th June, 2020, the energy minister symbolically presented to the people of the two cities the first consignment of materials for the project, promising that he would be visiting them to be presenting the consignments as and when they arrive.

Speaking at the warehouse at Yamandu, Alhaji Kanja Sesay said that the massive warehouse facility at Yamandu was carefully selected because the town is conveniently located between the two cities which would make it easier for the materials to be transported to Bo and Kenema. He however added that some of the materials and equipment would still be stored in Bo and Kenema.

Mr. Sesay said that a massive stock of the overall consignment was still to arrive, noting that what has been received thus far only constitutes 10% of the complete consignment that is expected. He assured that major towns along the highway linking the two cities would benefit from the electrification project. Mr. Sesay concluded by saying that the President had declared this year as a year of delivery, and that he as the minister of energy was committed to actualizing the President’s directive, irrespective of the Coronavirus.

Project Coordinator, Ing. Edmond Wuseni said that the materials met contract specifications in terms of quality and durability. He noted that the consignments include poles, steels and PVC pipes, adding that the next consignment would contain metallic poles and some other heavy equipment.

Present at the ceremony were the Permanent Secretary in the ministry of energy Tamba Gbetuwa ; the Resident Minister South Mohamed Alie ; the Director-General EDSA Joe Lahai and engineers from the ministry and EDSA.

The Bo-Kenema Network Rehabilitation and Expansion Project would give the two cities a massive facelift in terms of electricity. And with the determination shown by the minister , it is just a matter of time for the two cities to start enjoying quality and uninterrupted electricity supply.