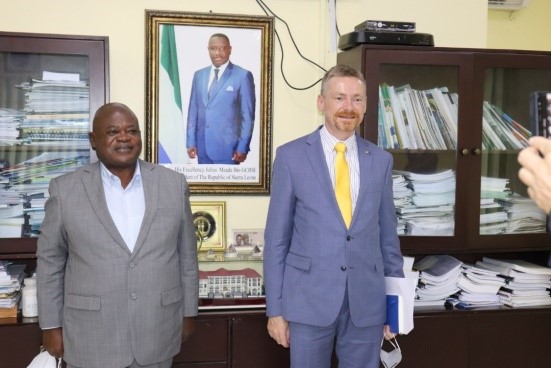 The Minister of Finance Dennis K. Vandi has in two separate meetings assured the New European Union Ambassador and British High Commissioner to Sierra Leone of the commitment of the Government of Sierra Leone to Public Financial Management reforms to enhance transparency and accountability in the public sector.

These back-to-back meetings with the two diplomats took place at the Minister’s George Street office on Thursday 16th September 2021.

In her statement the British High Commissioner to Sierra Leone Lisa Chesney MBE thanked the Minister of Finance and team for the meeting, stating that Sierra Leone is doing very well on the world stage on education and other policies decisions and reforms.

She commended the government for allocating 21% of its national budget to education.

High commissioner Chesney spoke of other areas of interest and intervention like Election Funding, Healthcare, the budget process, water, economic transformation with the private sector at the center, and climate change.

The European Union Ambassador Manuel Alexander Muller also, in his opening remarks stated that the European Union has been a long-standing partner to Sierra Leone over the years, adding that meetings of such nature will deepen understanding and cooperation between the Government of Sierra Leone and its partners.

Ambassador Muller furthered that they acknowledge government efforts in public financial management reforms and that the Ministry of Finance is critical because of its role in the budget process from development to execution.

“These roles with good reforms can be very useful in the fight corruption,” he said.

In both meetings, the Financial Secretary Sahr Lahai Jusu informed the Ambassadors that the government is currently undertaking lots of reforms to improve transparency and accountability including supporting the fight against corruption.

He continued that, discussions around PFM reforms are happening at the highest level of the presidency as well as trying to open up the platforms to Governance and Accountability Civil Society Organisation.

In the area of audit recommendations, the Financial Secretary stated that government is not only trying to implement them but also will put out a report on the progress of the implementation for partners and the general public to know.

He calls on partners to support these reforms including strengthening the PFM Act 2016 and automating procurement and financial transactions in the public sector.

Minister of Finance Dennis K. Vandi thanked both ambassadors for their support over the years and also assured them of the government to not only improve public financial management but to also continue to allocate more resources to pro-poor projects, human capital development, and the fight against COVID-19.

Cross-section of representatives from MDAs

Whilst addressing representatives of MDAs, Ansu S. Tucker who is the Director General- HRMO, underscored the relevance of the manpower hearing saying, this year’s session falls in line with the previous annual hearings which boils down to strengthening payroll management and improving medium term planning and budgeting of personnel cost in order to forecast and meet the manpower needs of the civil service, which sector (civil service), accounts for a significant proportion of the national budget.

He mentioned that the Annual Manpower Hearing session is organized by HRMO and it is part of public financial management process. He went on to say, the hearing examines the human resource proposals and requirements of MDAs in order to determine their actual needs.

DG Tucker admitted that some MDAs are not serious with the manpower planning and he therefore stressed on the importance of manpower planning- as it informs critical human resource decisions such as recruitments, promotions, exits or retirements as well as decisions to create new positions or increase the establishment of MDAs.

He acknowledged that some MDAs have undergone management and functional reviews in order to revamp their structures and align their functions to their new mandate and therefore, it is expected that those reviews should also form part of the manpower planning process.

DG Ansu S. Tucker makes clear that, at the end of the hearings, HRMO and MDAs will come up with plans that have share understandings in accordance with the manpower plans of the various MDAs.

He entreated that the manpower plans and budget of MDAs should be implemented as plan in order to avoid delays, which assure reduction in what he described as “voracity and unpredictability of the budget process” in order to make way for HRMO to develop strategic roles that would meet the HR needs of the various MDAs.

Temple Run Not a Pathway to Success

Every citizen in Sierra Leone with the requisite qualification has a right to seek employment and work. Unfortunately, jobs are few are far between, even the government realises that job creation is a huge problem, with its youthful population mostly unemployed.

Over the years it has been a lot of complaints from various women and youth groups about government’s inability to create job opportunity for its women and youths. This issue has been worsened by the emergence of the COVID-19 pandemic. The few employed young people are losing their jobs as businesses continue to downsize staff due to low sales.

This desperate attempt to seek greener pasture has led to an increase in irregular migration which many Sierra Leoneans have termed ‘Temple Run’. The journey across the Mediterranean Sea to Europe has left many Africans dead.

Mabinty Kamara who attempted the dangerous journey explained the process is frustrating and full of challenges and some of the challenges she highlighted include language barriers, infringement on human rights, torture, and exploitation.

Mabinty was a volunteer nurse at 34 Military Hospital in Wilberforce, Freetown, and was part of the Female Surgical Department. She noted that she tried tirelessly to get a pin code from the Sierra Leone government that could have made her receive salary to take care of herself and her family, but she did not succeed.

‘’Other people who have attempted the illegal pathway to Europe have reported paying huge sums of money for them to travel, even with their lives at stake. Upon arrival in these countries, their passports are usually confiscated, ladies are introduced to prostitution and some are brutally manhandled by citizens of the host country’’ she said.

Chiblee Francis Kamara Acting Deputy Commissioner of Labor said their role is to ensure the creation of job opportunities for thousands of citizens in Sierra Leone.

He revealed that the Ministry coordinates several programmes where women and men can seek overseas employment adding that the recruitment of women as domestic workers in Saudi Arabia and other countries after the lifting of the temporal ban on traveling will soon be resumes.

He stated that some of the criteria needed for these women to travel include the ability to read and write, test negative for HIV and AIDS, Pregnancy, Syphilis, and other diseases. He added that having completed all the processes successfully these women will leave in batches legally and their stay will be monitored by the government of Sierra Leone.

He strongly discouraged illegal migration (temple run) and encouraged women and youths to seek legal opportunities as and when they are available. 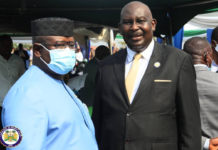 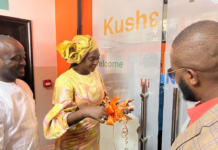