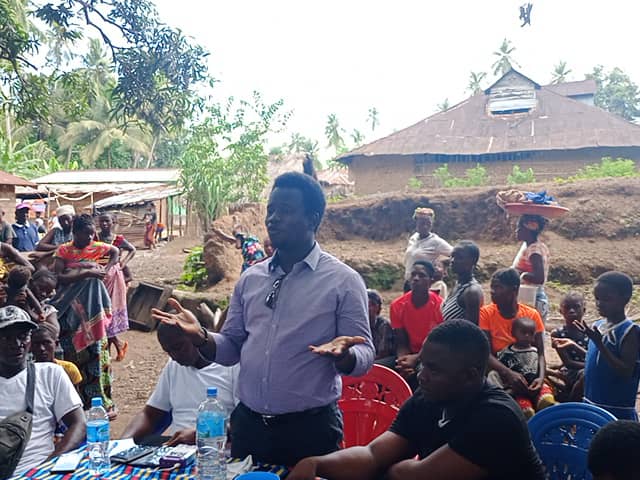 The deputy chairman added that the people of Mange has now realized their mistake to have followed the fruitless wordings of deceiving politicians and today they are wallowing in political  deprivation as a way of paying the price of their political blunder.

The deputy chairman said Mr. Conteh has come at the right time and they are more than ready to give him their unflinching support.

He ended by introducing the APC section Chairman whom the section chose to explain some of their difficulties to Mr Conteh in the course of the meeting.

The chairman of APC Mange section Mr. Mamoud Sobala welcomed Mr Conteh and his team and said his coming to see and engage the people is a timely venture.  He said it has taken ages such a meeting has never happened, Mange section is lagging in many areas as they are yet to benefit from general government services compared to other areas, we have voted APC for so long but have not felt the impact he added.

The people of Mange section expressed grievances such as political segregation that led to the loss of the constituency seat in 2018 he continued.

I organized the meeting myself so as to tell Mr William Yandi Conteh the undeserved sufferings the people at Mange Section have faced.

He noted that, the biggest desire of the section is the construction of secondary school so as to increase the level of literacy and save the lives of their children who often drown in the river as they travel by sea to Robat via canoes to attend secondary school education.

Mr. Sobala added that education is the tool to development and sustainability.

He pleaded to Mr Conteh to do all he could to help them in salvaging some of these problems.

In his short statement,  Mr Conteh donated 20bags of cement as a starting point for the commencement of foundation work of the Secondary School project adding that he cannot promise to solve all their problems but his doors are always open to the people as and when needed because the resources are available.

Mr. Conteh expressed sympathy for the souls of those great children that died in the river as they seek to pursue their dreams of being educated.

“They’re no more with us but their memories will stay with us as we continue to learn from their demise and solve the problems we are confronted with” Mr. Conteh added.

He appealed to the people to embrace the APC party and ensure that they vote against the NGC or any other party other than the APC in the section and the Constituency at large.

Mr Conteh later inspected the Community center project that he turned the sod for in March 2021 in order to assess the progress made so far. 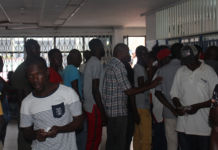