“Climate change is a ‘crisis multiplier’ that has profound implications for international peace and stability, Secretary-General António Guterres told the Security Council …’If we continue on our current path, we will face the collapse of everything that gives us our security,’ he said:  food production, access to fresh water, habitable ambient temperature and ocean food chains.  The poorest — those with the least security — are certain to suffer.  …Climate change can only be dealt with by unparalleled levels of global cooperation, he said.  It will compel countries to question economic models, invent new industries and recognize the moral responsibility that wealthy nations have to the rest of the world, placing a value on nature that ‘goes far beyond money’… ”.

“Climate Change is here with us – the desert is encroaching at 0.6 kilometers every year; floods are washing away the rice farms; people do not plant when they are supposed to plant; the rains do not come when they are supposed to come. This is causing rising food prices and scarcity of food” – Paddy Ezeala, CEO and Editor-in-Chief, Development Agenda magazine, speaking in an interview on  Nigeria’s ARISE television, July 23, 2021 . (Paddy Ezeala –  who I am in daily contact with and has been named as “contributor” in his magazine –   has been my closest friend in Nigeria since 1992 when I met him as the Press Officer in the Cross River National Park Project [CRNPP] in Cross River State, Nigeria; when my Liberia-originated organization as GREENLOVE/Nigeria had been contracted by the CRNPP to produce and publish PANGOLIN magazine for the CRNPP).

NIGERIA: Petroleum-rich Nigeria since the 1970s – with a GDP today  of $514 billion, Nigeria  is the largest economy in Africa; and with 220 million people, it is the most populous country on the continent – should not be having food insecurity crisis, yet….:  “(Six)… Nigerians slip into extreme poverty daily. That is, two third of the population live in extreme poverty ….  Statistics show that 60% of the population have no food security….. Nigeria is poor and 40% of its  population are without access to water”. (SOURCE Nigeria: battling extreme poverty & hunger; wordpress.com)

“Oxfam… (stated) that 112 million Nigerians are living in abject poverty… Commenting on the report, Celestine Odo, Good Governance Programme Coordinator for Oxfam in Nigeria… said the (OXFAM report) highlighted the fact that poor people are unable to benefit from Nigeria’s wealth because of high levels of corruption and the excessive influence that big business and a wealthy elite have over government policy making…..For example, he said public officer holders stole an estimated $20 trillion from the treasury between 1960 and 2005, while multinational companies receive tax incentives worth an estimated $2.9 billion a

(Posted By  Lukwago J in Life style May 19, 2017; Can The Wealth Of These 5 Richest Nigerians End Poverty In Nigeria? (newslexpoint.com)

SIERRA LEONE: “(The) 2017 Global Hunger Index has ranked Sierra Leone third from the bottom with a shocking score of 38.5…. Sierra Leone is ranked 117th out of 119 countries ….(as the) third hungriest country in the world…” (SOURCE:  thesierraleonetelegraph.com; November 2, 2017 Abdul Rashid Thomas). The APC government of former President Ernest Bai Koroma was in power when Rashid Thomas published that piece in 2017; has much changed as regards food security with the SLPP’s Retired  Brigadier Maada Bio holding the reins of the presidency since March, 2018?

“…In 2019, the U.N. Development Programme Index ranked (Sierra Leone) 181st out of 185 countries,   based on ‘average achievement in three dimensions of human development –

a long and healthy life, knowledge and a decent standard of living.’ ….More than 3 million Sierra Leoneans lack reliable access to adequate food. In total, over 40% of Sierra Leone’s population is food insecure. .. According to the 2019 Global Hunger Index,   about one out of every four people in the country are undernourished…”.

(SOURCE: 5 Facts About Hunger in Sierra Leone | The Borgen Project)

Sierra Leone’s GDP of 4,893 billion, and 7 million people, in a political space of 47,000 square kilometers can hardly be compared  to Nigeria’s GDP of $515 billion, a population of 220 million, and a land area of 924,000 square kilometers. But, both countries have uncanny similarities. Both have had (have) mineral wealth that should have made them as prosperous as South Korea or Singapore – but, both have had largely corrupt politicians and bureaucrats that have made the majority of their people dirt poor (in spite of the Herculean efforts of the Commissioner of the Anti-Corruption Commission of Sierra Leone from 2018, Ben Kaifala, in taming voracious corruption), propaganda ammunition for white racists who are convinced that the black man is incapable of sensibly managing his own national resources. Climate Change caprices  – already a reality in both countries, as Paddy Ezeala pointed out about accelerated desertification  Nigeria; as the 2017 mudslide in Freetown burying alive over 1,000 people, and low agricultural yields in a country where 60% of the labour force are engaged in agriculture, and 65% of the GDP is from agriculture  … – would dramatically worsen the plight of the poor in both countries.  How would the governing elite in Nigeria and Sierra Leone react when the convulsions of man-made Climate Change gain momentum, and how would they bargain for desperately-needed financial resources for Climate Change Mitigation and Adaptation from the West, and China, that are the main culprits for global warming… Climate Change?

US Destroying Planet Earth to Be Obese

“One of the problems feature people consuming too much food, or too much of what isn’t good for them. While people are consuming excess food, there are some families that can’t put food on their own table. While both of these things are happening, 40 percent of food in the United States is never eaten. ….. According to stateofobesity.org factors related to obesity are also rated as communities’ priority health issues, including nutrition and physical activity at 58 percent, heart disease and hypertension at 57 percent and diabetes at 44 percent. Individuals who are obese are at increased risk for type 2 diabetes, heart disease, some forms of cancer, dementia and a number of other health concerns. …There are financial implications related to obesity as well. Obesity causes the country more than $150 billion in healthcare annually. The extra weight becomes not only a burden for those carrying it, but for taxpayers as well. (SOURCE: Obesity, Hunger & Food Waste in the United States; jterm18coma287.blogspot.com

“Food is the single largest direct and indirect driver of climate change….Clearing, burning, plowing and tilling natural habitats release enormous amounts of greenhouse gas into the atmosphere, as do the cattle from methane and manure, other animals and the crops used to feed them. Overall, agriculture generates more emissions than all the airplanes, cars, ships and other vehicles combined — a total of 24 percent of the greenhouse gas emissions our societies emit”. (SOURCE: The biggest culprit behind climate change may surprise you | Greenbiz). What those quotations highlight is this: US citizens are destroying the world spurred by their  demonic gluttony.

With a population of 331,449,281…citizens of the United States –  emitting 5.41 billion metric tones of noxious gases into the atmosphere (15% of global total)  –  are literally eating the world to death. And causing themselves food-related diseases that cost them $150billion yearly to handle!!  When US President Joe Biden said at the recent Leaders Climate Virtual Summit that US’ carbon emissions is “below 15%” to China’s 10.06 billion metric tonnes of emission (28% of global total), he was indulging himself in an Orwellian Big Lie, for China’s population of 1.4 billion is about FOUR TIMES larger than US’ 331 million people – in per capita terms, and historically, the US’ citizens are the worst culprits of Climate Change.

When United Nations Secretary-General António Guterres called for wealthy  “countries to question economic models”…., “recognize the moral responsibility”… put “a value on nature” that “goes far beyond money”, he has been accused by the political  “Right” in the West (like the Republican party in the US) of aiming to forge a global  Socialist system in the world, which is antithetical to the creed of Capitalism which since the advent of the Industrial Revolution has generated the greatest wealth ever in human history for peoples in the West, and technological and scientific wizardry that would be described as magic just a century ago.  There is growing resistance to what has been dubbed the “Great Reset”.  For humanity to check Climate Change racing towards tipping points in 10 years, it is not only global inequality that must be changed; but, the corrupt and insensitive governing elite within countries like Sierra Leone and Nigeria must also be reined, tamed, or, shoved from power.  Do you know why the attitude of the political and bureaucratic elite to  the crescendo on the cataclysm that Climate Change would mean for Africa has been lukewarm?  They don’t care!!  They have a lot of their wealth stashed in the West.  They are confident that when things get worse in Africa, they can flee to the West. Even if the governing elite of Nigeria are hit by a light on ‘the road to Damascus like the biblical Saul’, how can Nigeria GDP’s of $514 billion stand up to US’ GDP of $22 TRILLION – forty two times more than Nigeria’s; not to talk of the US’ military expenditure of $778 billion to Nigeria’s $2 billion? Can someone guide me to enlightened Africans and global citizens to provide funding  to dilute my green messages into imaginative drama and video documentaries – like the ideology of the SLAVE SHIP-FREEDOM SHIP Movement I am founder and CEO of: to fuse the THOUGHT of the Atlantic Slave Trade with Climate Change, an ‘emotions-weapon’; to give vim to another of my  imaginative ideas,  like the ‘Resurrection’ of Michael Jackson with his “Earth Song”  –  to reach the handful of enlightened African, and global, elites, and the majority children and youth in Africa who must act in belligerently emergency mode to save themselves? 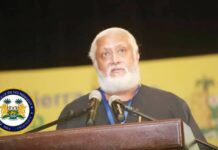 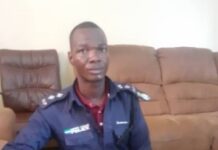 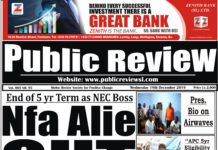 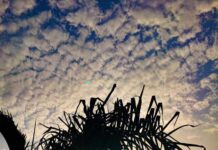