Passengers onboard the SLAVE SHIP-FREEDOM SHIP: Can we PLEASE (!!!) Does critical analysis of this delightful and informative piece written by Engineer Andrew Keili, and help to forge solutions to some of the issues he has raised?

In the article of his “PONDER MY THOUGHTS” Column of August 27, 2020, titled “AFROBAROMETER: THE PEOPLE HAVE SPOKEN”, Andrew Keili has indicated that he was an aspirant for the SLPP presidential candidacy for the 2012 presidential election.  He has not stated that as an eminent  indigene of Kailahun District, he committed ‘heresy’  by leaving the SLPP (for those  who don’t know, the SLPP is not just an ordinary political party to nearly  all peoples of the Mende-speaking  Southeast of Sierra Leone, it is a religion – stronger in  its cohesive  force than the Islamic and Christian religions people in the region claim adherence to)  and pitching tent with the National Grand Coalition (NGC), with its key founder being Hon.  Kande Yumkella (also another SLPP-heretic who left the SLPP to form the NGC); Kande Yumkella, to me, is, indisputably, the MOST GLOBALLY-FAMOUS SIERRA LEONEAN EVER IN OUR COUNTRY’S HISTORY. Andrew Keili did not write in his article he was Vice President candidate to Kande Yumkella in the 2018 presidential election.  As I have often stated, the SOURCE of an information can sometimes be more important than the content of the information itself.  It may help you to appreciate Andrew Keili’s article – always ‘peppered and salted and ogiri-ed’ with witty anecdotes – with a bit more information on Andrew Keili.

Andrew Keili was an engineer in the diamond, and rutile, mines from his 20s; there, he lived a life of luxury, by Sierra Leonean standards. And a life of being overworked by his largely white man bosses.  (The

A Staff area of Sierra Rutile when Andrew Keili was middle-rising-to-senior-engineer there in the 1980s to 1995 when the RUF rebels sacked their mines and drove them out… used to be called “Small America” – because of the affluent lifestyles in suburban ambience by the senior staff families who lived there). Andrew Keili’s story was not one of rags-to-riches, rather, it was partial-riches-to-riches story, as Andrew Keili is one of the seven sons of late Bishop Keili, the first non-Krio (“kontri man”) bishop of the

most-upper-crust-Krio conservative-Krio churches since the Krios as freed slaves from the Americas founded Freetown in the late 18th century, the Anglican church. (That should tell you that Andrew Keili would have mutated from being a Mende man into a ‘Krio boy’ from his cradle – sociologically, if he couldn’t do so genetically).

After the RUF rebels had attacked the Sierra Rutile concession in Moyamba and Bonthe districts in 1995, Andrew Keili and the rest of the engineers relocated to Freetown.  While most of the other senior engineers appeared disoriented in Freetown, some falling into hard times, others migrating to other countries to seek for mining jobs,

Andrew Keili teamed up with his ‘Krio brothers’, the over-confident and/or snobbish son of an upper middle-class Krio family, Tani Pratt, and Alex Kamara (a Temne man whose mutation has surpassed Andrew Keili; for Alex Kamara is a white man in mannerism and speech – though he has ebony black skin) …  to establish the engineering consultancy, CEMMATS.  Both Tani Pratt and Alex Kamara, like Andrew Keili, were mining engineers who rose up to management levels in the Sierra Rutile company, positions reserved then for white men.

Andrew Keili, Tani Pratt (his junior sister tried unsuccessfully  to teach me the French language in the Albert Academy in the 1960s; she bemused us then with her  “schwen-schwen” accent,  typical of the English-accented Krio of  upper middle class Krios), and Alex Kamara:  within  ten years they  developed CEMMATS into an unparalleled engineering and business success.  At one time they successfully managed the National Power Authority (NPA) of Sierra Leone when the company was in the doldrums in the early 2000s.  CEMMATS has won contracts in all spheres of engineering in Sierra Leone, and West Africa, and as far away as Asia. They have leased a huge building off King Harman Road, in the Westend of Freetown, and ferry their staff to their engineering sites in company-owned coaster buses. Theirs is a symbol of pooling together rare Sierra Leonean intellectual prowess; and they have manifested rarer Sierra Leonean emotional maturity in sticking together as their wealth grew.

Andrew Keili was also coordinator of President Tejan Kabbah’s advisory board in the 2000s. He can take credit for the resurgence of the post-war economy of Sierra Leone; and the sprouting of vibrant and productive national institutions like the National Revenue Authority (NRA), and the monolithic pension fund for public sector workers, NASSIT.

Andrew Keili was fortunate enough to have as junior brother, late Christian Keili, the most unimpeachable honest journalist I have come across working in Liberia, Nigeria, and here in Sierra Leone.  Andrew Keili and Christian Keili were co-owners of Salone Times newspaper. Probably, in honor of his almost-saintly brother, Christian Keili (womanizing is an excusable sin, right?), Engineer

Andrew Keili has learned, improved on, and evolved into a master in writing – becoming today among the top 1% of most widely-read, and respected, columnists in Sierra Leone’s history.

Andrew Keili’s wife, Helen Keili, a veteran teacher; a beauty-queen-beautiful lady with class and grace and firmness, would not deny that Andrew Keili is the brain  behind the success of one of the most academically-successful private educational institutions in the history of Sierra Leone  – the Modern Elementary School, and the Modern High School. The schools are now housed in huge four storey buildings at 19 Jomo Kenyatta Road, at New England Ville in the West End of Freetown.  Their pupils would always rank among the top three in all public exams in Sierra Leone.

As a writer, Andrew Keili has that rare capacity to weave scintillating facts and figures with rib-cracking humor; with velvet gloves always on; even when he would be going for the jugular of public officials, his prose would be oblique and honeyed with wit. Read the opening paragraph of Andrew Keili’s aforementioned piece: “The people have spoken! I recall an incident in the 2010/2012 campaign for the SLPP flagbearer ship in Kenema. All of us 19 aspirants were present at a gathering of our supporters and the general SLPP membership at the Holy Trinity hall. Our Chairman, John Oponjo Benjamin, ‘summarized’ his speech in one hour and only gave each of the aspirants 5 minutes to make our sales pitch to the audience, advising us that ‘brevity is the soul of wit’! The speaking sequence was balloted for and aspirants tried their hardest to appeal to people in the five allotted minutes, with the audience listening intently. When it was Maada Bio’s turn – I think he was sixth – there was a sudden invasion of masked devils into the hall and on to the stage, led by a wily J.J. Saffa. A well-proportioned Bondo devil nearly knocked me over. I suspect I know who was under the mask! Gorbois, Gafa gortuis, Jobais, and other Mende masked devils danced around Maada Bio, holding his hand up high, and Gorbois made their usual fun. To say the rest of us were shocked will be an understatement. Creating the impression, he was the inevitable leader, his speech (aspirant Maada Bio, that is) was short – ‘The people have spoken!’. There was pandemonium and everything was brought to an abrupt halt… I recall Alpha Wurie muttering underneath his breath, ‘Which kine nonsense dis?’. I laughed my head off anytime I recall this incident”. I laughed my head off too when I read that “Basket-Mouth Nigerian-stand-up-comedian-like-hilarity in Andrew Keili’s prose this morning.  I am sure even President Maada Bio that Andrew Keili has taken a dig at… would burst out laughing; as well as his cabinet ministers, finance minister, J.J. Saffa, and health minister, Dr.  Alpha Wurie. (I suspect that the face underneath that Bondo devil mask that nearly knocked Andrew Keili at Kenema was one of Andrew Keili’s ‘amorous

victims’ during the rip-roaring philandering days of Andrew Keili at Sierra Rutile!).

In all my 42 years post-university life in Liberia, Nigeria, and here in Sierra Leone, Andrew Keili is one of the most well-rounded and accomplished professionals I have come across, or read about.  The President of the Republic of Sierra Leone, Retired Brigadier Maada Bio, made it one of his candidacy’s  mantras, and presidential pronouncements over the past two years,  words on the  harnessing of the human resources of Sierra Leone, which in Singapore’s Lee Kuan Yew-manner,  President Maada Bio has been acknowledging is more valuable a resource than even our jewelry diamonds, which are  some of the biggest and most priced diamonds on planet earth.  With learned Yogic discipline, a dispassionate President Maada Bio should harness the 1000-carat-like-rare intellectual and professional capacities of Andrew Keili. Reeling out statistics from the recent Afro barometer survey on people’s failed-grade on the just over two years of the Bio Administration, Andrew Keili accentuated the gravity of the challenges the

Bio presidency is enmeshed in, and Sierra Leone’s economic plight today – which the majority of the people (68%) are groaning under, especially people in the Northwest strongholds of the main political opposition, the APC. Andrew Keili is one of the best human resources that President can harness to give him accurate analysis devoid of sycophancy; giving the President knowledge garnered not just in some doctoral degree classroom, but knowledge earned through tested and proven experience in the private sector.  Andrew Keili also has earned wealth, moral background, to efficiently run any public sector and to resist corruption. 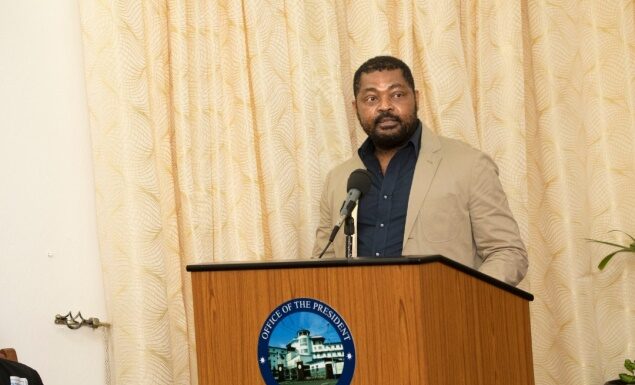 I Will Not Forsake You Nor Abandon You -Dr Samura Kamara

ABOUT US
The Public Review Newspaper was established in 2012 by its publisher Joseph Turay, who was one time Acting Secretary General of the Sierra Leone Association of Journalists (SLAJ)
Contact us: [email protected]
FOLLOW US
© PublicReviewsl.com All right reserved
ankara escort