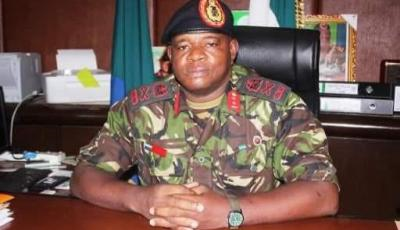 The Campaign For Human Rights and Development International (CHRDI) welcomes the immediate response from the Republic of Sierra Leone Arm Forces (RSLAF) or the Ministry of Defence (MOD) to a press release issued on January 5th January 2022, “CHRDI Condemns Corruption, Sexual Harassment and Rights Violations in the Republic of Sierra Leone Armed Forces (RSLAF)”. This demonstrates that the organization is willing to engage in a transparent dialogue about issues reported within their institution.

However, CHRDI had hoped that the serious issues raised in our press release would have received more attention than just a mere dismissal.

After all, if there are no cases of sexual harassment within (RSLAF), why is the institution continuing to receiving money to address a non-existent problem?

Acknowledging that there is a problem is the first step toward fixing it, and it appears (RSLAF) leadership is in denial.

CHRDI disagree with RSLAF’s way of responding to the issues raised, in large part dismissing our legitimate call for accountability.

The MoD or RSLAF press conference failed to provide accountability on funds, resources, and measures or actions the institution is taking to address issues of sexual based harassment to the media and the general public. Perhaps MoD or RSLAF didn’t want to comment on the $290,000 USD due to concerns not to prejudice the matter under ACC investigation; But they have not commented on the fact that (RSLAF) nominated 4 senior staff members from both MoD or RSLAF to have direct access to the funds, which admittedly are still under ACC investigation.

It is deeply concerning that (RSLAF) stated that there are no such cases of sexual harassment within (RSLAF).

Perhaps again there are no such cases “to their knowledge” because there are no proper complaints mechanism established within the (RSLAF) for GBV cases, sexual penetration, or domestic violence, and when complaints reach the management, they are sometimes catalogued as a family affair issues, and therefore personal issues. It seems that an approach of “Don’t ask, don’t tell” was adopted by (RSLAF) with regard to sex based abuses. We challenge (RSLAF) to publish a complete documentation on mechanisms in place for members of the (RSLAF) to file complaints based on sex discrimination; how are these complaints processed, by whom, and within which timeframe.

How many such complaints were received in the past 2 years, and how were they addressed. How many individuals were held to account for sex based abuses, and what were the punishments.

How many complainants suffered retaliation because of their complaints?

After all, all Sierra Leone’s public institutions should publish their efforts to address sex based harassment, discrimination, and assault within the workplace, particularly given President Bio and the First Lady’s costly efforts to change the attitudes on women in our society.

We sincerely hope, and reiterate our call for the MoD or RSLAF to stand up for women rights, and treat their colleague military personnel, their mothers, their sisters, their daughters, with respect for their human rights.

CHRDI has a dedicated team of selfless volunteers who have remained committed and have contributed immensely to our existence since we registered in 2011 and since then have made a difference in the lives of many Sierra Leoneans through research and public education on human rights and social justice.

As a Civil Society Organisation, we have a moral obligation to the people, and our democracy to ask for accountability and transparency and to help address the issues that affect the most vulnerable in our society.

We want to assure MOD or RSLAF that we will not relent in our efforts to ask for accountability and transparency. No amount of intimidation will deter us.

We continue to protect the confidentiality of our sources, as some of the survivors who spoke with us fear for their life, their job, and their family.

Note: Campaign for Human Rights and Development International (CHRDI) is a Rights based social-policy advocacy Organisation. We Draw attention to the responsibility of duty-bearers to uphold human rights, and seek to support rights-holders to claim their rights. CHRDI is in Special Consultative Status to the United Nations Economic and Social Council and accredited to many UN Agencies.

The Parliament of Sierra Leone has debated and approved with unanimity the Fourth Report in the fourth session of the Committee on Appointments and the Public Service, chaired by the Acting Leader of Government Business, Hon. Bashiru Silikie.

The following presidential nominees were approved by Parliament:

Members of Parliament who spoke to the motion referred to the nominees as competent for their respective appointments aimed at improving the economy of the country and protection of the environment. They also called on one of the nominees to do more in light of the redenomination of the Leone and thanked President Bio for appointing competent people to serve in high offices of State.

Congratulating the nominees after approval, Hon. Speaker of Parliament, Dr. Abass Chernor Bundu wished them well in their respective appointments for the development of the country.

In another development, the Parliament of Sierra Leone has debated and passed into law a Bill entitled: “The Forestry (Amendment) Act 2022”.

The Bill was seeking to amend the Forestry Act of 1988 and to provide for other related matters.

It was piloted by the Minister of the Environment, Prof. Foday M. Jaward.

Members of Parliament who contributed to the debate called for the strict implementation of laws in light of the protection of the environment and described the amendment as “non-controversial”.

The Bill was seeking to amend the Local Government Act of 2004, to extend the period of local council election from four to five years to reflect the tenure of other elective public officers, to reduce budget costs, and to provide for other related matters

The High Court of Sierra Leone Holden at Bo presided by the HONOURABLE JUSTICE ANTHONY GANDA has on Thursday 13th January 2022, sentenced EDWARD MUSTAPHA LUSENI, a former staff of the Anglican Diocese of Bo, and of No 2 Luseni Street, Gbondo Town, Bo, to pay a fine of THIRTY MILLION LEONES (Le 30,000,000) or serve THREE YEARS imprisonment following his conviction on six (6) out of eight (8) counts of corruption offences.

EDWARD MUSTAPHA LUSENI was standing trial together with Bishop Emmanuel Tucker, Bishop of the Anglican Diocese of Bo, on eight (8) counts of Misappropriation of Donor Funds contrary to Section 37(1) of the Anti-Corruption Act No. 12 of 2008. However, Bishop Emmanuel Tucker was acquitted and discharged on all eight counts, while EDWARD MUSTAPHA LUSENI was convicted on counts 3 to 8 and acquitted and discharged on counts 1 and 2.

THE HONOURABLE JUSTICE ANTHONY GANDA further ordered that, within three months from the date of conviction, EDWARD MUSTAPHA LUSENI should pay to the Anti-Corruption Commission the sum of a further THIRTY MILLION LEONES (Le 30,000,000) as restitution.

It could be recalled that, in April 2018, the Anti-Corruption Commission filed an indictment relating to the misappropriation of donations made by the Trinity Wall Street in the United States of America to the Anglican Diocese of Bo meant for the provision of relief supply for the Ebola epidemic and for the provision of agricultural and educational support for the south and eastern provinces of Sierra Leone.

The Commission wishes to reassure the general public of its firm resolve to curbing corruption at all levels in Sierra Leone.

The total of ten bikes received will offset the 48 Motorbikes that were lost in the fire incident, and that the Government has committed to replacing the burnt bikes to help sustain the livelihoods of the affected victims.

The Director-General of NDMA, Lit. Gen. (Rtd) Brima Sesay expressed his profound gratitude to the leadership of the SLPP North America branch. The DG noted it was the wisdom of His Excellency, Rtd. Bragada Julius Maada Bio created the National Disaster Management Agency.

“The Wellington PMB Fire incident was the first test case the agency had but because of our rooted effort and the commitment of our staff, we coordinated all actors strategically to manage the situation; we gave dignified burial to corpses that were burnt beyond recognition,” the DG confirmed.

The Deputy Minister of Justice who doubles as the SLPP Secretary-General, Umaru Napoleon Koroma, said, “I feel very much honoured and privileged to witness one of the fulfillment of the dreams of our forefathers, almost 71 years ago in April 1951, they formed the Sierra Leone People’s Party; they never thought about colour, region or tribe but they aspired to unify the country under one country, one people doctrine; this gesture is one that craves to support affected Sierra Leone without asking about their alliance, this is what we stand for.”

The Deputy Director-General, John V. Rogers, thanked SLPPAN for thinking of Sierra Leone and mobilizing resources to support the victims of the Wellington PMB inferno. John V Rogers said things have never been the same since the COVID-19 outbreak gripped the world but to receive this support at this time is a welcoming gesture and will help resuscitate the livelihoods of affected victims.

The Chairman of the SLPP North America region, Desmond Pessima, said the ten people who will receive the donated bikes will reduce the number of the already affected victims whose bikes were destroyed to 38, lift some of the burdens from governments. “We believe and will continue to support His Excellency, President Julius Maada Bio’s Agenda,” he noted.

Santigie A. Turay one of the Victims and a beneficiary of the ten Bikes, thanked the (NDMA) and (SLPPNA) for the good gesture, he said since the incident happened the Government have been very supportive and received the best of care while at the hospital. Abdulai Kromoa another victim stated that “I was reassured by the President’s statement when he came by my bed at the hospital, I was devastated, he cried seeing my condition, and said don’t worry, you will be fine, that became the source of my courage to fight for my life”. 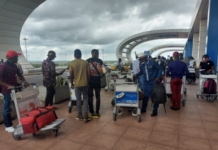 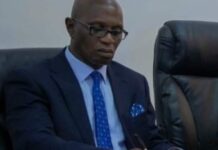