Beneficiaries of the Social Safety Net (SSN) program have in the sensitization meetings in Mattru, Jong Chiefdom, Bonthe District and Gondama, Tikonko Chiefdom, Bo District applauded the Anti-Corruption Commission (ACC) for its role in the program, in ensuring that the direct cash transfer process is devoid of corruption and corrupt practices.

These sentiments were expressed by Jeneba Cole, Hawa Tarawally, Kadara Wahab and Foday Samah, on Wednesday14th and Thursday, 15th July, 2021, at the community centres in Mattru and Gondama, whilst the ACC met with them to sensitize on the purpose, their role as beneficiaries and that of the ACC in the SSN program.

Jeneba Cole, a beneficiary of 57 years said, with the SSN funds, she took her sick mother to the Hospital, where she regained her health, noting also that, she used the money to educate her children and that currently she is a proud person with resources to take care of her needs-thanks to the World Bank, the National Commission for Social action (NaCSA) and the ACC, she added.

In his presentation to the beneficiaries, Director of Public Education and Outreach, ACC Patrick Sandi also thanked them for their recognition of the good work of the ACC, admonishing them to remain focused and utilize the funds in the best way expected. He furthered that, the Commission is only accountable to the people of Sierra Leone, which is why, the Head of ACC, Francis Ben Kaifala Esq., recently embarked on Town Hall meetings across the country, interacting with people-from Bonthe, Sherbro Island to Kono, Kambia to Mongor Bendugu (Falaba), Moyamba to Magburaka and Kamakwie to Koindu explaining to them the work of the ACC, the gains made so far and challenges faced, and asked for feedback. Director Sandi catalogued the many interventions the Commission has made in ensuring that beneficiaries receive the full amount of money due them. He updated his audiences on the recovery of stolen funds in the tune of over Thirty (30) Billion Leones from the corrupt, a hotel in Koidu City-now a facility used by Kono DiCOVERC, and the tremendous progress made in Local and International Corruption Perception Indexes.

Earlier in their remarks at the two engagements where they served as Chairpersons, District Monitor Bonthe District, David Garrick and the Data Entry Operator, Bo District, Andrew Forbie said, the SSN program is meant to alleviate the conditions of the extremely poor and vulnerable people, especially those seriously hit by the COVID 19 pandemic. David and Andrew stated that, the SSN/GRM is the World Bank and the Government of Sierra Leone funded program, with NaCSA implementing, Rokel Commercial Bank giving the cash directly to beneficiaries in their communities, and the ACC leading in ensuring that sanity and integrity are center-piece to the entire process.

The Section Chiefs of Njagbla-2 Section in Tikonko Chiefdom and Sopan-Cleaveland Section in Jong Chiefdom, Foday S. Kanneh and Osman Vandy respectively, in their statements thanked the Government of Sierra Leone and the World Bank for the cash support to their people. They however, requested for an increase in the quota of beneficiaries as a lot more people in their communities are very poor, remain vulnerable, and their situations are really pathetic.

The outreach events in Mattru and Gondama Towns, were climaxed by the handing over of SSN/GRM-COVID 19 Information, Education and Communication materials to the Community and District Monitors for display in beneficiary communities.

The SSN program targets thirty five thousand (35,000) households nationwide, where beneficiaries will each receive the sum of One Million, Three Hundred and Nine Thousand Leones (Le 1,309,000.00) for each quarter.

The public is hereby informed that I, Gibilla Kamara of 19 During Street, Makeni in the Bombali District in the northern province of the Republic of Sierra Leone and a staff of the Ministry of Agriculture and Forestry, wholly renounce and abandon the use of my former names Amadu Kalokoh and henceforth officially use the names Gibrilla Kamara.

All are required to now address me by my assumed names Gibrilla Kamara and all documents bearing my former names Amadu Kalokoh remain valid.

Sierra Leoneâ€™s Minister of Planning and Economic Development, Dr. Francis Kai-Kai, has urged key stakeholders in Tonkolili District to be determined in strengthening district development coordination for effective implementation of the Medium-Term National Development Plan (MTNDP) 2019-2023 in their district.

He made this statement, as he officially inaugurated the District Development Coordination Committee (DDCC) meeting for Tonkolili District. The DDCC meetings would be revitalized, strengthened and permanently institutionalized in every district, ensuring several development duplication problems are addressed, among others.

Minister Kai-Kai used the platform to urge all stakeholders in the district to attend meetings regularly, noting the importance of the DDCC to Tonkolili District.

â€œThis DDCC platform is here to unblock the challenges the district faces in their development agenda. This is the time for stakeholders to take full responsibility of development in their district, using such an effective structure to coordinate development interventions at district levelâ€, says Dr. Kai-Kai.

He noted that President Julius Maada Bio has always been very interested in knowing what occurs in every district around the country, which was why he continued to rely on such structure to provide the information required and the only people to provide such information were the people in their districts.

While formally lunching the inaugural DDCC, the Minister called on all key players to support the District Council in the process of unblocking development challenges in the district.

In her statement, the District Chairperson, Yabom Sesay, thanked the Ministry for the initiative; noting that such a process would be required to address the several development challenges they have as a district, particularly with the road, water and mining sectors.

She said the introduction of the DDCCs would strengthen Tonkolili in monitoring and supervising every development project across the district, even though, according to her, the district was challenged with mobility to go round the district to monitor and supervise these activities.

Madam Sesay called on every every stakeholder in Tonkolili to support the District Council in providing the leadership in coordinating, and monitoring development in the district.

Paramount Chief, Pa Alimamy B.Y. Koroma of Dansogoia, said they were happy to host the Ministry for such a laudable development initiative. He said the introduction of ghe DDCC meant that the Government of President Bio was very serious about development in the country. PC Koroma noted that they would remain committed to the process and ensure that development of Tonkolili was taken to another level.

Presentations on the District Development Coordination Committee and the identification of service providers by MTNDP clusters were presented by the Deputy Director of Rural Development within the Ministry of Planning and Economic Development, Madam Mbalu Bangura and Team

The DDCC would be chaired by the Council Chairperson, co-chaired by the Mayor for districts with two local councils, Councillors of strategic committees, Paramount Chiefs, Village or Tribal Heads, relevant Council core staff, MDAs, NGOs including non-state actors. The inaugural meetings would continue in the other districts in the coming weeks. 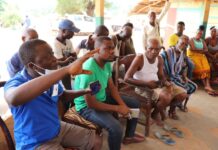