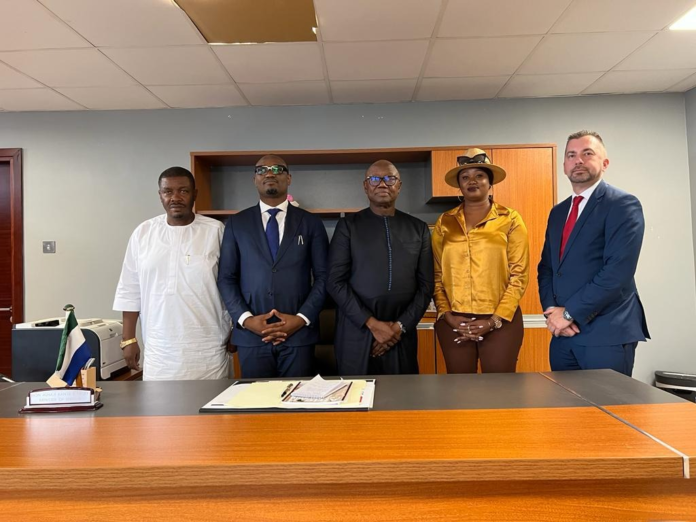 Sierra Leone’s Minister of Energy, Alhaji Kanja Sesay, has in an interview with the Africa Leadership Magazine given an upbeat assessment of strides made in the energy sector and assured Sierra Leoneans of the determination of the New Direction Government to ensure energy sustainability before the end of next year.

Alhaji Kanja Sesay spoke about the remarkable energy sector reforms so far undertaken by his Ministry, adding that President Julius Maada Bio’s New Direction Manifesto had promised a lot of reforms within the sector which he said were now being aggressively pursued and progressively fulfilled.

Mr. Sesay said the Government of Sierra Leone had created the enabling environment for private sector investments in the energy sector.

“If you consider all the investments through Government and our private partners especially in the mini grids, you will agree that we have done remarkably well, and on evidence of projections and works on the ground and by 2023, we are going to exceed the 350MW installed capacity,” the Minister of Energy said.

He spoke about a variety of energy projects like the Western Area Power Generation Project, the 160MW Bikongor lll Project, the 148MW Bumbuna Phase ll Project and the 28MW Betmai Mini Hydro Project, noting that with all these projects, Sierra Leone was on course to exceeding the 350MW installed capacity threshold by 2023.

The Minister of Energy talked the Africa Leadership Magazine through the Seven Districts Electrification Project, the privatization of the business of meters, the CLSG power purchase agreement and the technical and commercial losses incurred by EDSA in its operations.

“For the records, I just want to end that as a Government, we know that we have achieved a lot in the past four years. We are looking forward to increasing these achievements, and we are also committed to increasing access to energy,” Mr. Sesay concluded.

Response of Dr. Turad Senesie to the appeal of an APC member for reconciliation after publication of the census results

You tell your members to work with President Bio. I can still recall after the 2018 elections, President Bio contacted some of the opposition members to be appointed to join Cabinet, all of those contacted refused to join him in running this country. Some civil society activists that are women were also asked to be appointed in an effort to get the 30% women representation we promised in our Manifesto, they all refused because their political god fathers told them not to join Maada Bio. When they get to the radio, we hear the negative opposition voices.

– Join us at Bintumani to map out a pathway for national reconciliation, they refused,

– listen to what the President wants to say in running the state, they walked out of Parliament,

– let us do a mid-term census to help determine development trajectory, you shout at roof top asking your people not to be counted,

– Visits to President Koroma by the Vice President, Your media handlers misinformed the public that Maada Bio is begging President Koroma rather than seeing it as a move to working together and so on. So who do you blame for all this tension in Sierra Leone?

– The Commission of enquiry as I have stated often and again was a move by the President to send a message to Appointees. This was taken out of context and again taken to some other level….

– Economic situation that is globally affecting all countries has been turned into just a Sierra Leonean problem to a point that some sections of the opposition were even inciting the military to brutalise us and cause carnage and suffering to members of the executive. We had to work assiduously to forestall that. So who should work towards uniting our people when your actions demonstrate your level of hatred for another group of people you believe are suppose to be under dogs and should not lead our country?

So uniting our people is easy when others are ready to do so and not work towards destabilising the State by refusing to cooperate with the executive on all policy issues. The APC is setting bad precedents and I will keep reminding you just the way I was reminding you when we (SLPP) were in opposition.

“You cannot be in opposition and want to run the State using your own terms. Even the weakest regime on earth will never allow that to happen”.

Let us put Sierra Leone above our individual interest. When there is a policy drive, let us look at that policy from a national lens. If there is an alternative, bring it forward. But in Sierra Leone, everything is opposed and no alternative suggested.

United Nations Resident Coordinator, Mr. Babatunde Ahonsi, has said that with robust partnerships, the UN System, the Government, and the people of Kono could work together to address some of the development challenges facing the diamond-rich district.

He made these remarks during the official handover of agricultural equipment and inputs to farmers from three out of the fourteen chiefdoms in the district. Soa, Gbense and Kamara Chiefdoms were the beneficiaries of a pilot Human Security Trust Fund-supported project being implemented by UNDP and FAO since 2021 to enhance progress towards the SDGs in these communities.

Accompanied by UNDP Resident Representative, Mr. Pa Lamin Beyai, the Resident Coordinator said that though historically, Kono has been richly endowed with mineral and agricultural resources, its development indicators were below the national averages. “The development of the district is in stark contrast to its endowments,” he said.

He further emphasised that “the district’s relative remoteness and the persistence of several development challenges further compounded by conflicts have plagued growth and productivity.”

Mr. Ahonsi said he believes that the handing over event will complement the work that the UN System has started with the rehabilitation of the Inland Valley Swamps. The tools and equipment will enable increased food production for the community and beyond. He expects these interventions to be owned by the communities’ stakeholders and beneficiaries and a model for other communities to replicate and address longstanding development challenges.

UNDP Programme Specialist, Ms Josephine Scott-Manga, said it was a multi-faceted/dimensional methodology to address complex development challenges in her overview of the human security approach. “It provides a comprehensive response by crafting interventions that speak to social, economic, environmental, community security, cohesion and peace,” she remarked. Ms Scott-Manga noted that the approach also emphasised that women, youth, and people with disability are placed at the heart of decision making.

A representative of the Political Parties Registration Commission (PPRC) said the programme through the District Multi-Party Forum had contributed immensely to mutual understanding between and among political leaders in the communities.

Chair of the Council of Paramount Chiefs Emmanuel T. Foryoh assured UNDP and FAO of the programme’s success in all chiefdoms, promising that they will not be let down.

The programme recipients said the intervention would change the lives of the rural communities, that it was timely, that livelihoods have improved, and that peace has been established in their communities.

In his keynote address, Minister of Local Government and Rural Development, Mr Tamba Lamina, thanked UNDP and FAO for their engagements with the three chiefdoms of Gbense, Sao and Kamara, stressing that working together breeds peace and better development outcomes.

He said he was highly impressed by the testimonies of the recipients that the programme is going in the right direction. “If the programme succeeds, it will be used as a model in other parts of the country, and the other chiefdoms in Kono will benefit, “the Minister said.

UN Sierra Leone worked closely with the Ministries of Local Government and Agriculture to attract the Human Security Trust funding to strengthen human security and resilience in remote communities in the three chiefdoms for a two-year project. 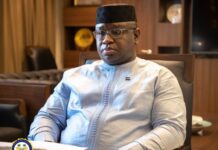 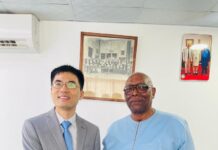