Stop what you are doing!! Read this article at least a dozen times.  Try to reflect on every sentence.  Discuss it with others.  Break it down into all the languages and  the lingua franca of your town or country.  Dramatize its content.  Make sure that 99% of the about 7 billion people on planet earth understand it.  Stop.  Think.  And embark now on a “STOP” movement.

Stop going to school or college for two days every week.  Stop going to your offices, farms, banks, markets…. Stop pretending that all is alright; stop thinking  that there are politicians, bureaucrats, religious leaders… who would seek your interest.  In a three-part serial in this Column  titled “The Greatest Evil”, I quoted Extinction Rebellion’s Jerome Hallam’s words that there is an “Annihilation Project” ongoing; “mass murder” of “billions of people” is being planned…being  effected.  Don’t think that this “mass murder” will be like an atomic bomb strike, or, a bullet in your  head when your death would  be fast – it would be slow excruciating death for you: heat wave; dehydration; starvation; heightened diseases…. Rape.  Murder.  Anarchy…. Stop!!  As the world marches towards another big global conference on Climate Change in Glasgow, United Kingdom in November, 2021, you must STOP, make your voice heard, so that you will prevent this mass murder.

“Hundreds of scientists, writers and academics from 30 countries sounded a warning to humanity in an open letter published in the Guardian in December….A 2019 report from the Breakthrough National Center for Climate Restoration, a think tank in Australia, projected that a rapidly warming world of depleted resources and mounting pollution would lead to ‘a largely uninhabitable Earth’ and a ‘breakdown of nations and the international order.’ Analysts in the U.S. and British military over the past two years have issued similar warnings of climate-and environment-driven chaos. …”. (source: Collapseologists are warning humanity that business-as-usual will make the Earth uninhabitable [yahoo.com)]; by Christopher Ketcham and Jeff Gibbs; January 31, 2021)

READ THE FOLLOWING TEN TIMES. SLOWLY. “Australian National University emeritus professor Will Steffen told Voice of Action that there was already a chance we have triggered a ‘global tipping cascade’ that would take us to a less habitable ‘Hothouse Earth’ climate, regardless of whether we reduced emissions….

Evidence shows we will also lose control of the tipping points for the Amazon rainforest (in Brazil), the West Antarctic ice sheet, and the Greenland ice sheet in much less time than it’s going to take us to get to net zero emissions, Steffen says.….9 of 15 known Earth tipping points have been activated”

The Report states that “Even the notoriously conservative United Nations Intergovernmental Panel on Climate Change (IPCC) has found that already with the 1.1°C of warming we have had to date, there was a moderate risk of tipping some of these…”.

If temperatures rise to 2 degrees Celsius above preindustrial levels?:  “Professor Hans Joachim Schellnhuber, director emeritus and founder of the Potsdam Institute for Climate Impact Research, believes if we go much above 2°C we will quickly get to 4°C anyway because of the tipping points and feedbacks, which would spell the end of human civilisation”.

Another warning: “Johan Rockström, the head of one of Europe’s leading research institutes, warned in 2019 that in a 4°C-warmer world it would be ‘difficult to see how we could accommodate a billion people or even half of that … There will be a rich minority of people who survive with modern lifestyles, no doubt, but it will be a turbulent, conflict-ridden world’….”. (SOURCE: ‘Originally Published by Voice of Action, June 8, 2020; ‘Collapse of Civilisation is the Most Likely Outcome’: Top Climate Scientists Warn – Resilience). Read that again. It means they plan to mass-murder about six billion people.  Africa ‘not prepared’ for climate change

“Africa is likely to suffer some of the worst effects of climate change and is ill-prepared to cope, officials said ….’If the sea level rises, most of the African large cities are going to be under threat,’ Ann Kajumulo Tibaijuka, executive director of United Nations-Habitat, Kenya, told a forum ahead of the annual African Development Bank meeting…..Some of Africa’s largest cities, including Lagos, Mombasa, Dakar, Dar Es Salaam, are coastal, and by 2030, more than 50 percent of Africans are expected to live in urban areas…” (SOURCE: Africa ‘not prepared’ for climate change [iol.co.za)]; By Lindsay Beck; May 14, 2007). Nearly all Africans depend on rain-fed agriculture.  A warning planet would mean less rain; droughts; and starvation for most Africans.

Aren’t the presidents, cabinet ministers, bishops, imams, etc.; aren’t the United Nations, IMF and World Bank leaders …reading and listening to these Jeremiad warnings of credible scientists on global warming and man-made Climate Change?  They are!  Why haven’t they taken the necessary action to PREVENT this mass murder? There is a global elite; an elite within each country in the world – from New York to London to Dubai to Beijing to Durban to Lagos to Freetown – that are the same.  Nearly all of them are university-educated and they have largely read the same books, put the same concepts into their heads. When they meet in international conferences they dress the same way, they largely speak the same language, drink the same coffee and tea, and chump on the same freshly-baked   cakes and biscuits.  They are rich and powerful.  They lack passion to change the systems of the world.  Why?  They think they can escape from the worst effects of man-made Climate Change.  Intrinsically, they are like the Nazis in Germany during the Second World War cold-bloodedly planning the “Final Solution” to mass-murder 6 million Jews – this time, it’s to mass-murder 6 billion people. In poor countries like Sierra Leone and  Nigeria, too many of the elite are obsessed with stealing public money; buying land to build mansions; fixated on “state capture” through political parties that have almost entirely failed to lift the majority of Africans from the throes of rising poverty; thinking that when the shit hits the fan and there is starvation and conflicts, the white man from Europe and America would come to save Africa, and they would escape to the West where they have kept their loot. We need ‘new green prophets’.

Again: I am the brain, and was the CEO,  of the SAVE MY FUTURE CONSERVATION SOCIETY (SAMFU) in Liberia in 1987.  In 1989, SAMFU was financed by the World Wide Fund for Nature (WWF)-

International and the German Forestry Mission to Liberia to produce and publish GREENLOVE magazine. In editor of GREENLOVE magazine, I called out for a “Marshall Plan” for Africa – massive transfer of financing from the West to Africa to save its tropical rainforests.  In 1992 in Calabar, Cross River State, southeast Nigeria, I hatched the SLAVE SHIP-FREEDOM SHIP concept – that is, global warming is a continuum of the Atlantic Slave Trade, which mutated into European colonization of Africa, which mutated into the global systems rigged against Africa at the end of the Second World War. In 1994 in Nigeria; in 1996 and 2019 in Sierra Leone, I developed projects that dramatize the fusion of the Atlantic Slave Trade and the thought that undergirds Climate Change – egoistic people in the developed world; gluttonous white people; and slave-minded Africans. Rich people in the West and China are slaves to consumerism and food – they must be freed. Poor people in Africa and the southern hemisphere countries are slaves to traditions and beliefs that are now obsolete, slaves of their own sense of powerlessness – they must be freed.  The few enlightened humans must bond together to imaginatively guide humanity to save itself. Pass the message: STOP!!  When you stop business-as-usual, the callously insensitive global elite would be compelled to take preventative action. Then, when COVID-19 ebbs, we will embark on massive civil disobedience; massive public demonstrations.  We, the people, are the majority.  Together, we have the power. We must vanquish the corporate titans that have enslaved over 7 billion humanity in a  $80 trillion economy. Make contact. There is no time to waste. Mobilize. Coordinate. 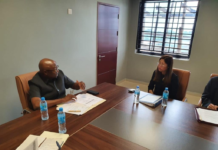 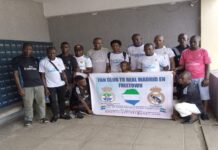 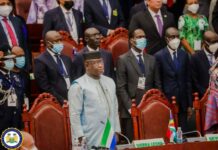