What makes the recent condemnations of hate speeches hypocritical is the fact that our Civil Society Organizations (CSOs); the Political Parties’ Registration Commission (PPRC), the Human Rights Commission of Sierra Leone, and even the Inter-religious Council of Sierra Leone who have been wearing the gown of being “moral guarantors” know when they all started. They pretty well know that hate speeches started the very day the Sierra Leone People’s Party (SLPP) came to power in 2018.

But before I go further let me give operational definitions of what hate speeches are. According to the Cambridge Dictionary, hate speech is defined as “public speech that expresses hate or encourages violence towards a person or group….” And that hate speech is “usually thought to include communications of animosity or disparagement of an individual or a group…” So, if we should use these definitions for the purpose of today’s One Dropian dropping, then it will be safe to conjuncture that the antecedents of the current spate of hate speeches could be traced to the SLPP’s Governance Transition Team 2018 Report (GTT Report).

In the GTT Report 2018, whether it is willful or inadvertent, the SLPP appears to have expressed “hate or encourages violence towards” the APC as a political entity when it states that, “the former Government of President Koroma pursued a policy of ‘tribalism’ and regionalism in its recruitment and promotion of personnel at State House, in Government agencies and commissions, and in diplomatic postings. Ethnically favoured appointments constituted roughly 71 percent of all senior and middle-level appointments and postings to the country’s foreign missions made by former President Koroma’s Government. Ethnic favoritism was also reflected in the APC Government’s award of GoSL contracts, scholarships, commercial bank loans and regional distribution of development projects, with the neglect of Kenema and Kono in terms of roads infrastructure being most glaring…” If this is not an incitement of South-Easterners against North-Westerners; then tell me what it is. You and I know that those allegations in that Report are not true but they appear to have meant to provoke hatred for members of the last APC government!

And that SLPP GTT Report 2018 was further given strength when high-profiled SLPP government functionaries began using “communications of animosity or disparagement” against members of the APC by calling them “Ayampi”, who were “running an enterprise of racketeering”. Now tell me, are these descriptions not meant to create hatred for the APC and its members? And why were those who are now parroting about “hate speeches” very quiet like tombstones when senior members of the Bio-led Government were saying such disparaging words against APC stalwarts?

Now let me ask just one hypothetical question. What would the newfound haters of hate speeches make of President Bio’s speech of 8 May 2020 in which he stated that, “The silence of the national APC leadership on the active participation of their members and executive members in these acts of terrorist violence, senseless loss of lives, injuries and wanton destruction of public and personal property is truly disconcerting…” Couldn’t such words, from the Commander-In-Chief, spur members of his own SLPP to “hate or encourage violence towards” the APC as a political group?

And maybe, just maybe, the Resident Minister North, Abu Abu, might have been spurred by President Bio’s speech of 8 May 2020. That might have been the reason why he had the audacity to threaten the exterminations of those who might want to oppose the President or stand in the SLPP’s way even if democratic niceties are employed by the would-be exterminated! And in typical SLPPian fashion, Abu Abu has not only gone scot free but still walking the corridors of power with the brazenness of a newly-inducted commander of one of the Al Salvadoran Death Squads of old.

Also taking the cue from President Bio’s speech of 8 May 2020 is Joseph Austin Johnny who says he is the Chairman of the SLPP grassroots! Mr Johnny might have been very troubled by the “disconcerting” silence of “the national APC leadership” which is why he seems to have believed that all “members and executive members” of the APC, both past and present, should be eliminated in a Rwandan-like pogrom.

Despite a press release surfaced on several WhatsApp fora, last Saturday, in which the “Sierra Leone Police Force [says it] is seeking information on an individual called Joseph Austin Jonny who is heard on audio threatening to destroy the lives and properties of certain group of Sierra Leoneans and by implication the peace and security of the state”; I still believe that nothing will come out of it! It will be another “buff case” which the SLPP government is now known for whenever grave issues of state concern one of its own.

I may be wrong. But it is my intellectual right to conjuncture that despite the SLPP issued a press release early last week to condemn “hate speech”; Joseph Austin Johnny might just be echoing the conventional thinking within SLPP circles. Or even in the corridors of power! He might have deliberately made what appears to have been a Freudian slip just to gauge the reactions of his SLPP folks.

The threat of a wholesale Rwanda-like genocide and Revolutionary United Front (RUF)-like arson might have been the genie which the SLPP might have kept in a bottle for future use but was accidentally let out prematurely. If Abu Abu and Joseph Austin Johnny could overtly make such statements that border on genocide and arson; then we need to scratch the surface to see where they might have got their inspirations from. Again, maybe, just maybe, they might have got their inspirations from the SLPP GTT Report 2018 and the President’s speech of 8 May 2020!

But come to think of it, it will be pointless for a eunuch to threaten a pregnant woman with rape! Does a jelly head like Joseph Austin Johnny think they would commit mass murders and arsons on the rank and file of the APC without any reactions from them? It is just one of the laws of nature for people to protect their lives and property with any means possible. Even toothless bull dogs will fight with all their strengths when their lives and kennels are in danger! 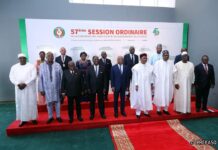 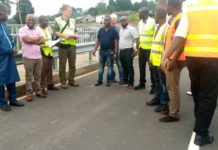 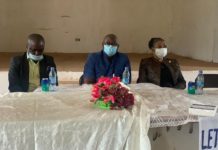