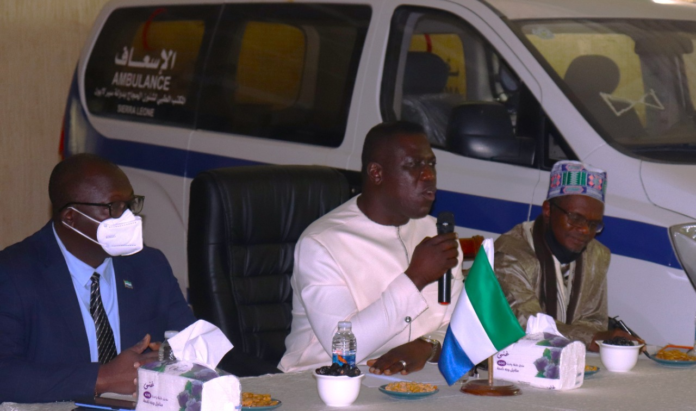 Sierra Leone’s Minister of Foreign Affairs and International Cooperation, has assured Sierra Leonean students in the Kingdom of Saudi Arabia of job opportunities upon completion of their courses and subsequent return home.

Professor David J. Francis was speaking during an interactive meeting with a cross section of Sierra Leonean nationals and students at the Sierra Leone Chancery in Riyadh on Thursday.

Professor Francis said as Sierra Leone’s Foreign Minister he was pleased to meet and interact with the staff of the Embassy and cross section of students and Sierra Leonean nationals.

“I am pleased to inform, especially the students here, that we are on the verge of completing the construction of a new Foreign Service Academy. The courses you are pursuing are beneficial to Sierra Leone and be rest assured that there are job opportunities for you in Sierra Leone upon your return,” Professor Francis assured.

The Foreign Minister reaffirmed President Julius Maada Bio’s commitment to Human Capital Development, especially the Free Quality Education, which he described as the flagship of the New Direction administration. He disclosed that, during his fruitful meetings with the authorities in the Kingdom of Saudi Arabia, he made a request for increase in scholarships and that there was strong commitment from the Saudi authorities to increase scholarships to 50 per annum for 5 years.

The Minister also responded to requests made by the President of the Sierra Leone Students in Riyadh, Saudi Arabia.

The President of the Union, Zachariah Barrie, had earlier, on behalf of students in the Kingdom, appealed to the Foreign Minister for the Government of Sierra Leone to provide them with allowances, wave off COVID-19 test fees for students travelling from or returning to Sierra Leone after their studies, shipment support of their property, and employment opportunities upon graduation.

Professor Francis instructed the Students Union President to liaise with the Director General of the Ministry of Foreign Affairs and International Cooperation through the Sierra Leone Embassy in Riyadh, for the issues to be addressed.

Professor Francis also commended the Sierra Leone Embassy especially the Ambassador, Dr. Ibrahim Jalloh adding that he was very proud of how the ambassador had cemented diplomatic ties with the Kingdom of Saudi Arabia.

“The Kingdom of Saudi Arabia is on the verge of opening its Embassy in Freetown under the New Direction Government for the first time in 42 years of Diplomatic Relations between the two countries. During my engagement with my counterpart, I presented Sierra Leone as a land of opportunities, more so in the areas of tourism, agriculture, mining, trade and investment.” Professor Francis concluded.

In his statement, Ambassador Dr. Ibrahim Jalloh thanked the Minister for attending the familiarization meeting organized by the Sierra Leone Embassy despite his busy schedule. He said Sierra Leone and Saudi Arabia had a bilateral relation spanning four decades and that Sierra Leone had benefited a lot from Saudi Arabia in the areas of education, health and infrastructural support.

Ambassador Jalloh informed the Minister that Sierra Leoneans in the Kingdom “are good ambassadors of Sierra Leone because of their good attitude and peacefulness, which the Saudi Authorities acclaim.”

Earlier, President of the Sierra Leone National Union in the Kingdom, Abdulai Conteh, on behalf of the nationals in the Kingdom, welcomed the Minister of Foreign Affairs, describing his visit as timely.

He lauded the Human Capital Development drive of the New Direction government, especially towards the Free Quality Education, which he described as the bedrock of the country’s development.

Mr. Conteh also commended President Julius Maada Bio for appointing Dr. Ibrahim Jalloh -a renowned Islamic scholar who studied in the Kingdom- as Sierra Leone’s Ambassador in the Kingdom. He described Dr Jalloh’s appointment as “one of the best in Sierra Leone’s history because Dr. Jalloh is well known in Saudi Arabia and his vast knowledge in the Arabic language makes his job easier”.

Youth Advisory Group to be launched

The Ministry of Basic and Senior Secondary Education (MBSSE) supported by Plan International Sierra Leone will be establishing a Youth Advisory Group by April this year, with the strategic goal of engaging young people in internal decision-making at all levels in a spirit of collaboration, transparency and mutual learning.

During a roundtable discussion held on Thursday 27th January at the Ministry Conference Hall, New England Ville in Freetown, the Minister Dr. David Moinina Sengeh stated that last November during the COP26 Summit in Glasgow, he made a commitment to establish a Youth Advisory Group and it is important for the Ministry to begin to actualize that pronouncement two months later.

He said after the establishment, the Ministry will try its level best in ensuring that this Youth Advisory Board goes into the Education Act and this will make it part of the structure in MBSSE.

“The Ministry is providing services for close to three million people which is close to 50 percent of the country’s population. So it doesn’t make sense if young people are not part of the architecture of that decision making. We are starting small with the Youth Advisory Group and that is why we brought them here today in order to brainstorm which will inform the final design of the program,” the minister said.

The Country Director of Plan International Sierra Leone Mr. Evariste Sindayigaya said for Plan, they recognized that by not including young people in their planning and decision making processes, everything they do including governance they are losing huge opportunity, not only in terms of legitimacy or the value of decisions they make, but also the unique perspective that young people bring to their work.

“Young people, the future will be kind to you if you contribute in writing it, and I can’t be more excited today to say that the Honorable Minister and the leadership of the Ministry has given you a platform to join them in writing your own history, your own future, therefore do not underestimate this opportunity,” he said.

He said their responsibility with support from MBSSE is to make sure that they develop together pathways of young people into leadership, and it is towards this objective they will direct their effort, energy and resources.

“I want to make a commitment that Plan International Sierra Leone will continue to make sure that the voices of young people are heard and are valued,” he said.

The Deputy Minister of Education (1) encouraged young people to continue to break barriers, noting that they are on the verge of leaving and they need vibrant young people to take after them.

Youth Advocacy Group will comprise sixteen members each representing their own district, four (4) members – one each from the following groups: Special needs Institution, Parent Learners, Tertiary or Vocational Institutions; and Remote/hard-to-reach area, and a minimum of eight (8) females.

The most important selection criteria for YAG members will be that they are creative and innovative thinkers and highly motivated to drive change. Formal educational qualification will not be a criterion for selection. Rather, the selection process will identify young people with bright minds and high potential.

During the roundtable discussion, Sorie Korombo and Mariam Samai who are youths working with Plan International Sierra Leone, did a presentation on what young people desire from the  Ministry of Basic and Senior Secondary Education when the Youth Advisory Group is established.

The IGP, Dr. Ambrose Michael Sovula, in a short speech disclosed how important the WAPIS/NCMS could be to not only Sierra Leone but Africa and the World at large. He stated that WAPIS/NCMS is a global and internal security framework to counter or combat transnational organized crimes and terrorism and a Centre for law enforcement agencies adding that the system provides a platform for electronic management and the sharing of information on crimes and offences among the various actors both locally and internationally.

Dr. Sovula also revealed that the system would allow for effective and efficient coordination and collaboration among stakeholders in combating crimes especially transactional organized crimes.

The IGP emphasized on the timeliness of this centre in line with the  growing trend in cybercrimes and threats, identity theft and its prevention using the Fully-Verified system, as well as threats posed by terrorism and human or drug trafficking.

The West African Police Information System (WAPIS) Project is the brainchild of the Economic Community of West African States (ECOWAS), funded by the European Union (EU) and implemented by INTERPOL.

In its current phase, it includes the 15 ECOWAS member states and the Islamic Republic of Mauritania.

Among other speakers were WAPIS-INTERPOL representative from Cameroon – Mr Richard Gotwe and the Head of EU Political Section – Mr. Juan Antonio Frutos, who strongly advised on the sustainability of the Centre after EU could have stopped funding in 2025. 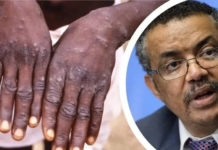 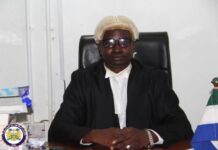 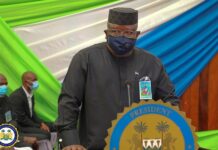