Bo Rangers’ 5-0 home win against Mighty Blackpool strengthened their hope for the champion trophy after FC Johansen had stunned title contenders East End Lions 1-0 in Makeni, making the Killers’ chase for the summit even cumbersome.

Blackpool’s hapless woes heated high as Amadu Mansaray’s left footed corner strike went four, before Musa ‘Tombo’ Kamara, who hasn’t scored since April 2, converted a decisive volley into the back of the net after a howler from the Tis Tas Boys’ goalkeeper, Saidu Kamara.

Bo Rangers are now topping the table with 63 points, leading East End Lions by five points with five games to go. The Elephants have won 20 matches, drawn 3 and lost 6, scoring 41 goals in the process, the highest number of goals scored so far in the campaign.

FC Johansen dented the Killers’ hopes with a 1-0 win away to the defending champions. Abubakarr Kanneh’s only goal mid way into the second half took the Dream Chasers to 41, leaving Lions five points behind Bo Rangers.

The Killers lost for the first time since the start of the second round in February. Their last defeat was against Central Parade in November.

FC Johansen have returned to winning ways after their 1-0 defeat to Mighty Blackpool last week.

The Sierra Leone delegation was warmly received by the General Secretary of the Federation Guinea de Football Lancinet Keita Kabassan and his team, in accordance with FIFA and CAF protocols.

It could be recalled that the Confederation of Africa Football had declared the Siaka Steven Stadium, among other venues across the continent, as unfit to host professional matches after failing to meet the CAF set standards.

In an effort to rehabilitate the Siaka Steven Stadium, the Government of Sierra Leone through the Ministry of Sports and the National Sports Authority has recently handed over the facility to the Chinese Aid for a thorough refurbishment and upgrading.

The renovation exercise is said to last for at least two years.

Consequently, Leone Stars will now have to play all their AFCON 2023 Qualifying home matches away from home.

The Sierra Leone Football Association delegation is expected to back in home tomorrow Sunday April 24 as the federation with support from government intensifies preparation, both technically and administratively, ahead of the qualifiers. 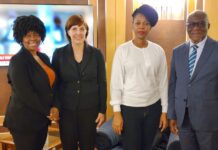 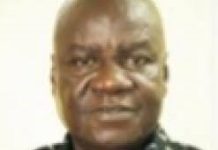