In its effort to curb bribrery at security checkpoints in the region, the North-West Office of the Anti-Corruption Commission has on Thursday 3rd September 2020 engaged Police, Military, forestry guards and Road Safety personnel deployed at the Mile 38 Check Point and personnel of the Masiaka Police Division to warn them against such practices.

There has been numerous complaints from the public and resentment about the infamous Mile 38 Check Point relating to extortion and collection of bribes and other corrupt practices prevalent at the checkpoint.

Explaining the purpose of the meeting, the Senior Public Education Officer Sahid Mohamed Kamara said the rationale of convening the meeting with the SLP and other personnel at the checkpoint was to educate and sensitize public officers on various corruption matters, apprise them of key content of the national corruption perception survey report, the ACC 2019 Amendment Act and to solicit their support in the fight against corruption.

Delivering the keynote address, Public Education Officer Mohamed Thullah said the ACC considers the SLP as a responsible partner and continues to strengthen partnership and building the bond between the two institutions in the fight against corruption. He informed them that as a way of bringing the fight closer to the people, the ACC has opened an office in Port Loko that will superintend and leads the fight against graft in the North-West Region. He went on to state that the North-West Office since its official opening has been inundated with calls and concerns from the public pointing at corrupt practices taking place at the Check Point. He pointed out that the ACC in responding to issues of public interest will take both proactive and reactionary steps to mitigate incidences of corruption and to also encourage Ministries, Department and Agencies to enhance best practices in their daily operations. He reminded them to be mindful of the law in the discharge of their duties and the presence of the elite scorpion squad of the ACC that will strike at any given opportunity in combatting graft and bribery.

On the recently published 2019 national corruption perception report, Mr. Thullah stated that the report captured the SLP as the most corrupt institution which is indicative of the apparent visibility and interaction with the public. He therefore cautioned them to be very mindful when dealing with the public. He highlighted several corrupt practices but not limited to issue of bail in police stations, senior officers enforcing a perverse system of returns in which rank and file officers are compelled to pay up the chain of command a share of the money they extort from the public, failure by senior management to take the necessary action thereby reinforcing impunity for police officers of all ranks to perpetrate crimes against citizens they are mandated to protect among other things.

In another meeting with personnel at the Masiaka Police Station on the same day, PEO Thullah encouraged personnel to maintain high ethical standards and professionalism that will immensely help to rebrand the image of the SLP and the support against the fight against corruption.

The Investigations Officer Samuel Tommy who gave an overview of the offences in the ACC Act 2008 and as amended pointed out key corruption issues in the traffic unit and explained some of the offences including corrupt acquisition of wealth, soliciting and accepting an advantage, abuse of office among others. “All of these corrupt practices have fuelled the negative perception of the SLP by the public,” he noted.

Welcoming the ACC team, the Local Unit Commander of the Masiaka division Chief Superintendent of police Edmond M. Baio thanked the ACC Team for sensitizing his personnel on various issues of corruption and expressed belief that the knowledge gained will serve as a guide for all officers in discharging their duties. He also registered his support on behalf of the division to support the ACC in preventing as well as combatting corruption.

The Divisional Traffic Officer at Mile 38 Check Point Assistant Superintendent of Police Alfred Turay lauded the initiative to engage and educate personnel at the Check point adding that the sensitization meeting will help and guide their operations. DTO Turay also encouraged all public officers to do the right things and to be mindful of the law in the line of duty.

Delivering the vote of thanks Police Detective Kadiatu B. Kamara expressed appreciation and thanked the ACC team for sensitizing them on various issues of corruption and promised to put into action the knowledge acquired.

Handing over of Information, Education and Communication materials climaxed both meetings. 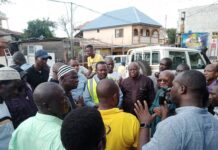 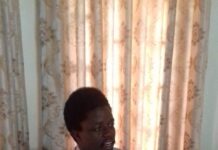 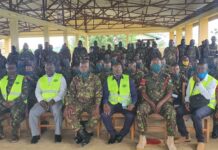