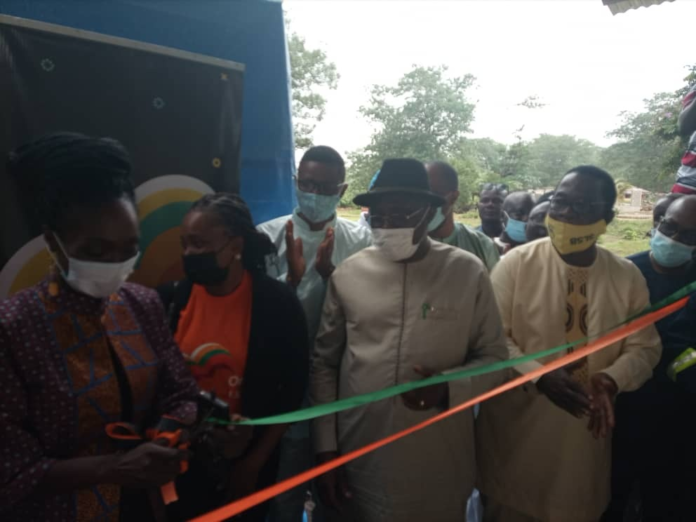 Orange SL, the leading and most reliable mobile operator in the country on Friday 23rd July 2021 donated one 500KVA Generator to Njala University, Mokonde Campus.

The generator is worth hundreds of millions of Leones. This gesture is just among the many societal initiatives in the Orange Corporate Social Responsibility (CSR) portfolio to support education in the country as well as support national development.

Staff and students of the university celebrated one of the greatest success stories of Orange Sierra Leone’s CSR as they were thrilled over the donation as it will settle the long suffering of acute electricity shortage in the campus.

The generator was commissioned by Chief Minister, Jacob Jusu Saffa who had made the request to the company.

The company’s move is to support and enhance learning in the university.

Orange, a company which has been in Sierra Leone since 2016 has been supporting a good number of the country’s development projects.

Speaking during the commissioning ceremony, Betts told beneficiaries that reliable power supply was needed for teaching and learning.

It was out of the need to support education; she went on, that the 500KVA generator was donated to the university.

“Teaching cannot be effective in the absence of power. Students are tech-savvy meaning there is an ever-increasing need for energy,” she emphasised.

Orange Sierra Leone, she said, is about supporting national development plans, noting that the company has an active CSR and Foundation strategy in education, health, women’s empowerment and culture.

The Orange Foundation Director also informed her audience that when the Free Quality Education scheme was launched in 2018, Orange Sierra Leone was the first business entity to pledge $1.5M in support of education for a period of five years.

“Orange Sierra Leone is an essential brand that improves lives because it is people-centered,” she said.

Under the company’s CSR scheme, several donations running into millions of Leones have been offered to universities and schools which include desks, computers and food items that were donated to students affected by Ebola.

She added that the company has sponsored several social activities in the university, notably ‘Miss Njala University Beauty Pageant.’

The donations, she went on, were means to give back to society.

Madam Betts also informed the audience that Orange Sierra Leone remains the leading and biggest GSM operator in Sierra Leone as the company takes the pride in 460 communication sites.

She said plans for further expansion are underway.

Receiving the generator on behalf of staff and students, Professor Andrew Baimba appreciated Orange telecom company for bringing light to the university.

Prof. Baimba pointed out that reliable energy supply had been a challenge for several years. “The university is not connected to the national grid,” he stated.

The Vice Chancellor was therefore grateful to the company for honouring its promise. He said a friend of the university engaged Orange Sierra Leone, and it was that engagement that Njala University celebrated last Friday.

He said the New Direction Government prioritised education and that Orange Sierra Leone has been very supportive of government in the education sector.

Professor Baimba also made reference to various forms of assistance which Njala University has been enjoying from the company.

Between 2015 and 2016, he went on, Orange Sierra Leone provided over 1, 000 pieces of furniture to the university to ensure a comfortable sitting accommodation for students.

He said the desks and chairs came at a time the university was in dire need and that Orange is a friend in need and a friend indeed.

The Ministry of Energy was represented by the Deputy Minister, Eldred Tunde Taylor. He informed his audience that “a strong and good relationship has been existing between Orange Sierra Leone and the Ministry. For the past 18 months, he said, Orange was among six competent aggregators.

He therefore described the donation as a demonstration of true commitment to Orange’s corporate social responsibility.

The Deputy Minister called on the University authorities to embark on prudent management and operations of the generator for sustainability.

He said three years ago, there was a total breakdown at the engine house, a situation that compelled the Energy Ministry to despatch high profile technicians to solve the problem.

Owing to the donation, by Orange Sierra Leone, the problem of breakdowns had been solved.

Taylor also stated that the Ministry of Energy was concerned with generation, distribution and metering.

He said it was the energy generation that Orange Sierra Leone had undertaken through the donation.

He made it clear that offices and hostels of Njala University had to be properly metered so that enough returns could be generated.

The move is to keep the generator up and running for years to come.

“We are determined to ensure that Njala University enjoys energy supply,” he said.

In his contribution, Minister of Information and Communication, Mohammed Rado Swarray also registered his gratitude to Orange Sierra Leone for their good work.

“We are celebrating Orange Sierra Leone’s goodies and goodwill,” he told the audience.

Minister Swarray alluded to the good old days when Njala University was the best place to visit noting that the college is today a shadow of its former self.

He also spoke about key interventions Orange Sierra Leone has made to the people of Sierra Leone.

“Orange Sierra Leone resuscitated a dying SLENA (Sierra Leone News Agency) and rejuvenated its publications,” Mr Swarray pointed out. According to the minister, SLENA is now a trusted government mouthpiece.

He also made reference to the Le1Bn donated to government by Orange Sierra Leone following the outbreak of Corona Virus in March, last year.

He also testified about the construction of three pre-schools in Kambia, Moyamba and Pujehun districts adding that he commissioned one of the schools.

“The right environment for learning has been created through the donation of the generator to the university,” he said.

Minister Swaray informed staff and students that a US$30M fibre project was underway adding that several towns and communities could be connected and that Njala University was a priority.

He assured staff and students that in coming days, the fiber would be landed in Njala University, a situation that calls for a reliable supply of energy.

He said the move was to actualise President Julius Maada Bio’s vision of Digital Revolution in Sierra Leone.

Orange Sierra Leone has readily answered the call for energy availability in the campus.

In his keynote address, Chief Minister, Jacob Jusu Saffa commended Orange Sierra Leone for supporting the Human Capital Development project which is the centre-piece of government.

Man, he said is the beginning and end of development. He said two months back, he got calls from Njala University for improved electricity.

As he thought of private sector financing for the project, he immediately contacted Orange company which provided the generator within a short period.

“We are eager to solve the electricity problem in Njala University,” he assured.

The Chief Minister however re-echoed user-fees for the generator for its sustainability. 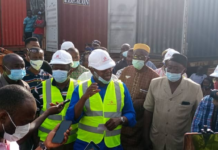