The product is to enable both Orange and SLCB customers to get easy access to their monies without having to pay transport at the comfort of their homes.

This product is part of Orange’s Cooperate Social Responsibility that allows customers to do a transaction for as low as Le10, 000 to Le15 Million.

Bockarie Kalokoh,Deputy Managing Director of the Sierra Leone Commercial Bank described the service as one of the bank ‘s happiest day, he added that SLCB had been on this journey with Orange for the past three years.

He revealed that he has been a user of the Bank-To-Wallet Product for the past one month and therefore described it as one of the best products ever in terms of banking activities, adding that as a leading bank, they believed partnering with Orange SL would ensure better service with their customers.

He continued that the most important thing of the product is the ease on cost of transportation and time, as customers no longer need to go to the bank to do transaction, noting that all they need to do is to move money to their Orange Wallet and do transaction.

Mr. Kalokoh however encouraged every service provider to ensure that they enroll with SLCB and Orange so that their services can be easily access.

Speaking at the launching ceremony, the Chief Executive Officer of Orange Money, David Mansaray  said that his company is very excited to partner with SLCB an exercise  he described  as a step towards a wider objective that will enhance a goal towards much more broader financial inclusion in the country.

He went on to states that the partnership is in the right direction, noting that the rate of Financial inclusion in the country is at a low rate of 20% ; and that the total average inclusion rate across the sub Sahara is 40%  saying  that they have a long way to go with such partnership .

He further maintained that the Orange Money Bank-To-Wallet product is a wonderful one for the time being that will save customers time and cost of transportation .

He said that it will also support the wider economy by helping teachers, nurses ; and other civil servants that work at  the far end  of the country.

According to him, the product gives them an opportunity not to trek from their village to go to an urban center to collect their monies; but can get it at the comfort of their homes as it takes away the pain of trekking.

He assured all their customers of a quality service of the Orange money bank to wallet that will enable them get easy access to their monies.

The Managing Director of Sierra Leone Commercial Bank Abdul F.Turay in a statement before the official launch said he is pleased with the collaboration with orange money, as the partnership will enhance a formidable and far-reach valuable business growth relationship.

He added that the alliance was designed to reach a large customer base; describing Orange customers’ base as the largest in the country.

He said that the service is for both the formal and informal system that  SLCB and Orange Money Bank To Wallet service would ensure that the SLCB has access to their monies in 24hours.

The Managing Director described the SLCB as the people’s bank, and that they are committed to supporting the government effort in ensuring that citizens are safe ; and that the Bank to Wallet product is geared to support government’s  objectives in its drive to economic development .

Mr. Turay explained further that,  with these services, their customers will no longer travel from longer distances to go to a banking hall,  but at the comfort of their homes  they can do their transaction as they wish and on time.

“As  a financial institution,  we will encourage  everyone to be safe;  and use this service especially during  this COVID 19 period, you need to stay at your home, it is part of our strategies to broaden our financial inclusion  in the country and SLCB is always there to take the lead in ensuring that  government  achieves their objectives”, he noted. 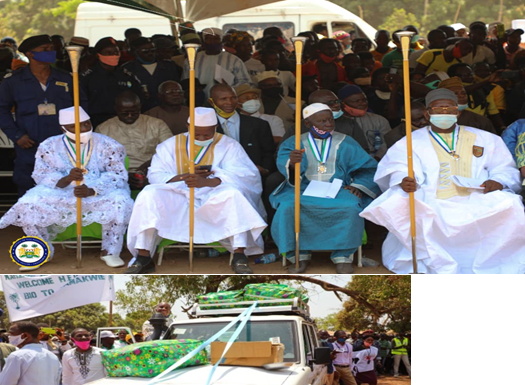