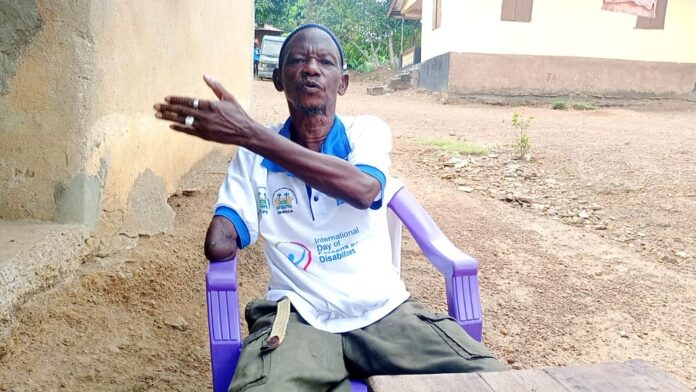 By Brima Sannoh in Pujehun

Sierra Leone’s civil war is on record as one of the worst in history.

Besides the high number of fatalities, it has the unmatched reputation of brutality characterized by amputations of civilians.

According to the post-war Truth and Reconciliation Commission (TRC) report, a myriad of factors led to the war, notably endemic corruption, bad governance, injustice and marginalization of certain segments of the population.

The TRC was set up to deliver accountability for human rights abuses during the 1991-2002 war. Chapter 6, paragraph 25 of the report laid out how two of the main waring factions – the Revolutionary United Front (RUF) rebels and the Armed Forces Revolutionary Council (AFRC) junta used amputation as their strategy to gain support among the people.

The perpetrators did not even consider the age or gender of their victims.

Two decades after the end of the war, the victims who are lucky to be alive are living deplorable lives. Most of them make a living begging in the streets.

Over 20, 000 people were estimated to have had at least one of their limbs – hand or leg – amputated or injured in some other way during the course of the 11-year-long war.

Between 2001 and 2008, the government, with the help of international donors, established the shelter program for amputees and war wounded. Through collaboration with the NGO, Norwegian Friends of Sierra Leone, a total of 500 houses were reportedly constructed for victims of war nationwide. Pujehun benefitted from 60 of those houses, built in five camps across the district.

The program initially took care of basic needs like clothing, food, health care, skills training, education for the children of the amputees, and psycho-social counselling. During its early days, life became a bed of roses for the lucky beneficiaries of the programme. Things however soon changed when the Norwegian NGO exited the programme and handed it over to the government.

Subsequently the victims were left to fend for themselves and many of them, especially the female ones, are now living a miserable life in these camps. Many others have returned to their original settlements.

Jane and Mary (not their real names), both gang-rape victims, live in the Fernadopo Amputee and War Wounded Camp in the outskirt of Pujehun Town. They were both diagnosed with fistula. The elderly women told ManoReporters that they rely on begging as their only source of livelihood.

“There are days that my children and I go without food when I do not get any money from begging,” said one of the women.

Five minutes bike ride away at the Konaleh Amputees and War Wounded Camp, Mamakoh Mansaray is lying in her parlor in an old, torn mattress made out of hay with grasses. The grasses from the mattress are strewn around the parlor, depicting an environment unfit for human habitation.

The mother of seven, who had her left leg chopped off by RUF rebels in her village in Sorogbeima Chiefdom, about 90 miles away, walks with the aid of clutches around the Pujehun Township where she begs for a living. She didn’t go out today because she isn’t feeling well, she said.

Mamako recalled the day she had her leg cut, the same day her three-month-old baby’s leg was also cut off and later killed alongside her husband. Both incidents happened in front of her. She said she has been dealing with flashbacks and nightmares of that incident.

Mamakoh is the Chairlady of her camp. She said out of her seven children, only four managed to stay in school. Her other two girls dropped out because she couldn’t afford to pay their tuition. She is worried that the two who are currently in secondary school may also drop out due to her inability to provide for them.

Besides the physical, psychological and economic problems persons living with disability face, they’re also suffering from discrimination, stigmatization and marginalization.

Mohamed Massaquoi, Chairperson of the Amputees and War Wounded Association (AWWA) in Pujehun, said most war victims are living in destitution, which forced them to desert the camps and settle where they feel they can get help.

Mr. Massaquoi lost his right arm in the early days of the war. He said even he himself is not spared the discrimination. He and his wife now depend on backyard gardening to provide for their four children. Massaquoi accused politicians in the district of using the plight of persons living with disability for selfish reasons.

“It has been like that for years. The only time politicians come around us is when they want us to vote for them. After that, we’ll not see them again,” he lamented.

Faced with this kind of treatment in the hands of the public, politics is a no-go-area for disabled people in Pujehun. The few who have ventured have only appalling experiences to share.

Even though the government of Sierra Leone has shown increased commitment on disability issues, including by the ratification of the Convention on the Rights of Persons with Disability (PWDs), the setting up of the National Commission for Persons Living with Disability and the enactment of the Disability Act of 2011, many still hold the view that much have not been done to address their suffering. And the stories of these war victims in Pujehun is a strong testimony to this.

The TRC report, which was published in 2004, recommended that amputees, war widows, children, victims of sexual violence and the seriously war-wounded, should receive reparations in the form of free education for children, free health care and skills training. The government, through the National Commission for Social Action (NaCSA), did implement some reparation activities, but they were marred by allegations of poor planning and corruption. Many victims say they are yet to get their share.

Ibrahim Borgiwa Swaray, the head of the Civil Society Forum in the district, said evidence abound about the neglect of PWDs either in the area of accessing free healthcare, as provided for in the Free Health Care policy launched by the government in 2010, or in their efforts to participate in the decision making process.

“It still remains a challenge for political parties to accept disabled persons despite several engagements with them,” said Swaray.

Pujehun is considered as a stranglehold of the governing Sierra Leone People’s Party (SLPP). Winning the party’s ticket is more or less an automatic victory for a candidate. But disabled people say they have always been sidelined by the party.

Suaba Simbo, a war wounded who lives in the Tongay Road Amputee Camp, is going through a great deal of suffering. His left arm was hacked off and the right arm was also badly wounded.

Simbo, who doesn’t identify with any political party, said even though parties encourage disabled people in public to participate in politics, they fail to provide them the necessary support.

Alpha Kamara, SLPP’s spokesman in the district, denied the allegations.

“Primary elections are decided by delegates of the party. When they vote for you, you will win and if they don’t, you will not win,” he said, adding: “If someone doesn’t win that doesn’t mean that the outcome of the election was remote controlled by the party executive.”

According to Kamara, SLPP adopted a resolution in 2018 which removed candidate fees for its physically challenged members vying for positions. He insisted that the party has followed that commitment to the latter, noting that they even promised to give more symbols to persons with disability in next year’s elections.

Some people believe that confining war victims to particular locations where they live alone is a part of the problem they face today. Joseph Sell, a resident of Gobaru Village, says the idea of building camps for them was itself an act of discrimination. He argued that they should have been integrated with the rest of the population so that they could see themselves as human beings who have equal rights to live with normal persons.

But a few people, like Alimu Kemokai, have refused to let their dark past define them. Kemokai, a black smith, lost his left leg in the war. The father of seven – four girls and three boys – is proud to be doing all he can to take care of his family by himself. He said he decided never to waste his time waiting for help from government because all of the promises they made weren’t fulfilled.

“When we heard that the government had included us in the free healthcare, we were very happy for that but to our greatest disappointment, we have gone there several times and all the nurses will tell us is that there is no medicine in the hospital,” said Mr. Kemokai.

Swaray, the civil society activist, stressed that there is the need for the government to rethink the welfare of PWDs.

“The district lacks disable friendly structures. This is something we have continuously engaged the public on. But it seems like they are not ready,” he said.

This report was done as part of a fellowship supported by the Africa Transitional Justice Legacy Fund in collaboration with the Media Coordinating Group. 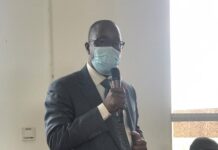 Nigeria Elections : Peter Obi could win the presidency but…