“An Inconvenient Sequel: Truth to Power”  is the follow-up to “An Inconvenient Truth”, Al Gore’s 2006 documentary about Climate Change.  Al Gore is screaming at all humanity on planet earth – which, includes, of course, the 7 million people among 7 billion other humanity in the tiny 47,000 square kilometers land area  of Sierra Leone.  As we mourn an estimated 1,000 dead from the mudslide in the recent environmental tragedy on the Freetown peninsular, the harsh probability, or, prognosis, is that this is just the beginning…  Much worse environmental tragedies await Sierra Leone, Africa, if we turn a deaf ear to Mother Nature; if we don’t’ start listening to the scientists.   Let us reflect a bit more on who is Al Gore – the most pre-eminent environmentalist in the world today.

Al Gore was the 45th Vice President of the US (1993 to 2001), when Bill Clinton was President.   Gore had served in two US legislatures for 24 years.   Gore is the founder and current chair of the Alliance for Climate Protection; the co-founder and chair of Generation Investment Management .  Gore is also a partner in the venture capital firm Kleiner Perkins Caufield & Byers, heading its climate change solutions group. He has served as a visiting professor at Middle Tennessee State University, Columbia University Graduate School of Journalism, Fisk University, and the University of California, Los Angeles.  He served on the Board of Directors of one of the leading environmental think tanks in the world, the World Resources Institute.  Gore has received a number of awards, including the Nobel Peace Prize (joint award with the Intergovernmental Panel on Climate Change, 2007); a Grammy Award for Best Spoken Word Album (2009) for his book “An Inconvenient Truth”.  Al Gore is a super heavy weight as a global luminary.

The mudslide in Freetown, Sierra  Leone on August 14, 2017 and the flood in Texas, US, this week are connected.  Because, everything in the world is connected – as Climate Change accentuates today.   It is time to speak Truth to Power if we are to save lives; to save children of tomorrow being drowned in rivers of mud like we experienced in Freetown.   Planet earth is in the throes of probably the “sixth mass extinction” of species on planet earth, a CNN advertisement warns – the others, caused by nature over millions of years; this one, caused by man’s lifestyle within just about a hundred years.  Not all man is to be blamed.

The people in the richest countries of Western Europe, the US, and now China, Japan, and India, are principally to be blamed for Climate Change.  About 90% of the CO2 spewed into the atmosphere that is causing the planet to overheat comes from these nations.   After the Second World War, the rapid growth of economies of the West, and the egalitarian luxury it meant for the people in the West, has meant a lifestyle that leads to waste; to gluttony.  A family of four people would have four cars.  People throw away over half of the food they put on their plates.  Governments subsidize farmers to grow food – and throw the surplus into the ocean.  The waste and gluttony of the West is demonic.    And insane.  Literally, they are eating the earth away and hastening Armageddon.  There has to be a dramatic overhaul of the global economic and political and market systems if we are to stand a chance of stemming the worst of Climate Change.

Locally in countries like Sierra Leone, in Africa,  the power elite, the governing elite, the educated elite, have acted over the past forty years as if issues of the environment should concern only the white man; or, are so distant, as if countries like Sierra Leonean are on planet Mars.   In 1987, I was the brain, and Executive Secretary, of the  Save My  Future Conservation Society (SAMFU) in Liberia.  In 1989, SAMFU was contracted by the World Wide Fund for Nature-

International, the  German Forestry Mission to Liberia, etc. to produce and publish the mainly cartoon GREENLOVE magazine, which I was Editor for.   The core of our message was: Don’t cut the forests.  You get food and medicines from it.  You get rainfall through it.  If you cut it, you are likely to diminish your food supply.  You are likely to cause soil erosion that will trigger floods, mudslides, landslides.  Too many of the educated elite in Liberia felt we were preaching about such things only to win international contracts.  Sure enough, Pope John Paul II, Prince Phillip (spouse of the Queen of England), UNEP, UNICEF lavished praise on GREENLOVE magazine after its debut on December 24, 1989.  When the war escalated in Liberia by mid-1990, I was sure that  BECAUSE of the tropical rainforests in Liberia (labeled one of the top 10 biological hotspots in the world), the big powers would speedily step into snuff the war.  I was disappointed. Liberia was not of strategic importance to its ‘big brother’, the US, like Petroleum-rich Iraq.   The closed mind of the West still festers today; there are Climate Change Deniers who are powerful in the US, and now have a greater voice in US President Donald Trump.

Africans must change thinking of seeing many  children as wealth

Sierra Leone, Africa, can justifiably blame the West for its environmental woes.  That will not help to prevent or mitigate such tragedies as we experience a month ago.  The tough reality is that we have to have a radical shift in how we think in Africa.  The culture that we must have too many children has to change drastically.   Too many children are not good for our forests – if we cannot implement more scientific ways of agriculture.  The thinking of not thinking in scientific terms, or, thinking in superstitious terms, is a guarantee that more environmental tragedies will onfold.  Even our politics has to change dramatically.

If governments want to remove people from environmentally-

fragile lands and people blackmail them with such words, “If you move us from this mountain, we won’t vote for you in the next elections”, then, we have to significantly change such form of governance.  Like what the Chinese did between 1945 and the 1990s when they made about the most meteoric surge in economic development among humankind on this planet.

The mudslide tragedy has happened.  Sierra Leone now has the opportunity to use the global floodlight on the country to be The Environmental Champion for all of Africa.

“Must we change? Do we really have to change?  Mother Nature is very persuasive ….Climate pattern is erratic ….We are running out of time”, Al Gore warns in his aforementioned video documentary.

A new online mapping tool, developed by the Climate Change and African Political Stability program, integrates climate, conflict, and aid data to predict future stability. The report was carried out by two researchers from the Department Agricultural & Resource Economics at UC Berkeley (US), who have drawn their own conclusions based on the analysis of statistical data from a 2009 study… The 2009 study claimed that the risks related to the outbreak of armed conflict in Africa would grow by about 54%, causing over 393,000 battle deaths by 2030, if future temperature trends continue.

In the current research into the link between climate and the increase of conflicts in Africa, the two scholars who have developed this study, Tamma Carleton and Solomon Hsiang, have determined that rising temperatures in sub-Saharan Africa since 1980 have raised the risk of conflict by 11%. (Source: Predicting how climate and politics affect stability in Africa https://sciencenode.org/feature/predictng-how-climate-and-politics-affect-stability-africa.php).

Putting those pedantic words in perspective, it could mean this: if the land in Tonkolili becomes too arid and cannot grow food, the people in Tonkolili will move into Bo District.  If much of Bonthe District goes under water, the people of Bonthe will move into Pujehun.  To farm.  To live. Conflict will be triggered.  Same when the land in Guinea gets too dry and Guineans start moving en masse into Sierra Leonean.  Now, you get the idea why I say that the horrific mudslide on August 14, 2017, was only just the beginning……  We can change. We must change.  There is need for thinkers who can see into the future and chart a more survival course for the people.   The Truth to power must be spoken unequivocally.  If those in power, or, those we give power to, are intellectually lazy, and short-sighted….

then, they should not be given power, or, power should be taken away from them – or, no matter how much we cry today in countries like Sierra Leone horrified by the caprices of environmental disaster, much worse will happen as Climate Change gains momentum. 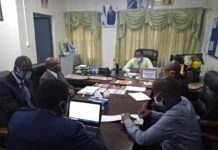 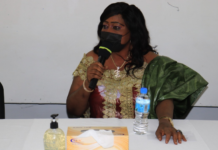