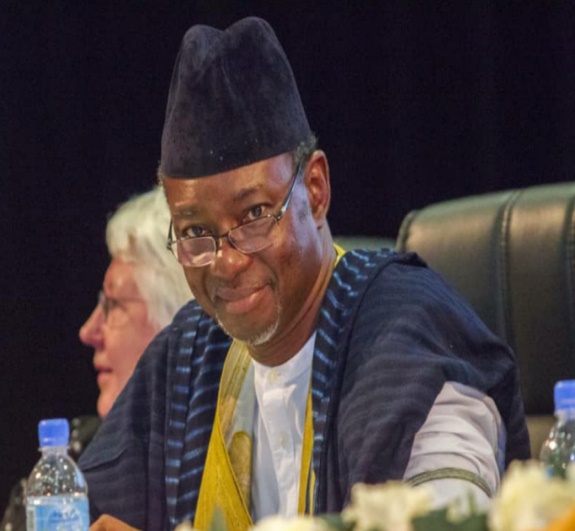 The Minister of Higher and Technical Education, Professor Alpha Tejan Wurie has been appointed as Regional Representative for Africa on the Commonwealth of Learning’s board for the term 2022 – 2024.

The Commonwealth of Learning (COL)was established by Commonwealth Heads of Government in 1988, following their meeting in Vancouver in 1987. Their conviction was that distance education and information and communication technologies would play an increasingly important role in the expansion of education, training and learning at all levels. Developments in succeeding years have proved that they were right.

Commonwealth of Leaning has its own Board of Governors, made up of representatives of the six countries making the largest voluntary contributions as donors (currently Canada, India, New Zealand, Nigeria, South Africa and the United Kingdom); four members each representing one of the four Commonwealth regions (Africa/Europe, Asia, Caribbean and Pacific); the Secretary-General of the Commonwealth; the President of the Commonwealth of Learning; the Board Chair; and a member appointed by me.

During 2021-2022, the Commonwealth of Learning continued to support the building of resilient education systems that can withstand future pandemics and natural disasters. Innovations that relate to technology solutions, models, processes and new ways of doing things will help us achieve both speed and scale.

On 23rd May, 2022 the Commonwealth Secretary-General wrote to invite Hon. Professor Alpha Tejan Wurie, Minister of Technical and Higher Education to be the Regional Representative for Africa on the Commonwealth of Learning (COL) Board for a renewable term of three years.  Professor Wurie’s extensive experience and knowledge of education, and his commitment to improving the educational opportunities for girls within the Commonwealth, led the organization to believe that they will gain enormously from his contribution which will lead to the development of organization in the coming years.

“I very much hope that you will be able to accept this offer,”  wrote The Rt. Hon. Patricia Scotland, QC of the Commonwealth Secretariat.

Indeed, the Minister and the Ministry of Technical and Higher Education are now globally recognized.

The People’s Republic of China has on Sunday launched the crewed spaceship Shenzhou-14, sending three astronauts to its space station combination for a six-month mission.

The trio will cooperate with the ground team to complete the assembly and construction of the Tiangong space station, developing it from a single-module structure into a national space laboratory with three modules — the core module Tianhe and two lab modules Wentian and Mengtian.

The spaceship, atop a Long March-2F carrier rocket, was lifted off from the Jiuquan Satellite Launch Center in northwest China at 10:44 a.m., according to the China Manned Space Agency (CMSA).

About 577 seconds after the launch, Shenzhou-14 separated from the rocket and entered its designated orbit. The crew members are in good shape and the launch is a complete success, the CMSA declared.

The crew will work with the ground team to complete the rendezvous, docking and transposition of the two lab modules with the core module, said Lin Xiqiang, deputy director of the CMSA, at a press conference Saturday.

The Tianhe core module was launched in April 2021, and the Wentian lab module is set to be launched in July and Mengtian in October.

The Shenzhou-14 crew will also witness, during their stay in orbit, the Tianzhou-5 cargo craft and Shenzhou-15 crewed spaceship dock with the core module. Then, they will live and work together with the Shenzhou-15 crew for multiple days before returning to Earth in December.

Sierra Leone’s leading commercial institution, the Sierra Leone Commercial Bank, with a reputation for promoting many worthy human and social causes, has thrown its weight behind the popular African Young Voices (AYV) media Housemate Salone Season 3 show as an official sponsor and also with its promotion “SUPPORT U HOUSEMATES”.

During the promotion period, existing SLCB account holders have to enrol for digital services and maintain a minimum account balance of L250,000 to have the chance to win weekly prizes.

Non-customers are encouraged to open an account, sign up for digital services, and keep a minimum account balance of Le 250.000 to be eligible for weekly prizes.

The SLCB ‘Support U House Mates’ Promotion is also meant to vote for a favourite housemate on SLCB Creative Tasks in the house by texting to 4488 Africell Network or on the website: www.slcbvote.com.

Housemates Salone is a Sierra Leonean reality game, love and impacts reality TV show based on a local content format.

Housemates Salone features a group of contestants known as “housemates” who live together in both enclosed and open-space houses that are accessible to the public.

This year’s “Yagba Season,” which was officially launched on Sunday, February 13th, 2022 at Mamba Point Lagoonda in Freetown, was graced by high-profile guests including the Minister of Tourism and Cultural Affairs, Dr. Memunatu Pratt, CEO of AYV, Ambassador Anthony Navo Jnr, CEO of Africell, Mr. Shadi Gerjawi, Ms. Saraih Robert, winner of the Housemates Salone Season 2, and people from all  walks of life.

In the three years that it has been hosted, Housemates Salone has gone international. This year’s show will be shown on the global Multi-Choice DSTV platform.

Prominent personalities that battled in the heats to enter the house this year include Patricia Rose Tucker (#53), a student at Njala University studying B.Sc Honors in Business Administration and Management; Ina Elizabeth Cole (#30), an IT graduate in Database Technology at IPMC College in Accra (Ghana); and George Taylor (#26), a chef based in the United States of America.

Almon Sall (#8) is an undergraduate pursuing a B.Sc. Degree in Public Sector Management and also takes modelling as a career. Lolo Simeon (#41) is an international model, interpreter, entrepreneur and founder of Fashion To Empower SL and Let Our Children Dream Foundation; Nohmi George (#49), an actor who has been part of the Actors Guild of Nigeria (AGN) after featuring in several Nigerian movies for years; Jeanie Healen Sundufu (#59), is a graduate of Fourah Bay College (FBC) with a certificate in Population Analysis and Social Statistics and a Bachelor of Science in Commerce; Daniel Sesay (#14), an

The Country Director for Goal Sierra Leone, Mr. James Riak Mathiang said that his organization has been working extensively to improve wash facilities. He added that menstrual hygiene was not only a fundamental part of health care delivery but also a safe water sanitation and hygiene practice

Madam Deborah Macaulay, speaking on behalf of beneficiary girls of the free sanitary pads expressed her gratitude to the President and his government. She described the First Lady as a selfless mother, nothing that before the campaign the country was known for high reported cases of rape, teenage pregnancies and early marriages. She concluded that because of the intervention of the First Lady who had visited schools, districts and regions, the country has been able to restore hope in every girl child.

The First Lady of the Republic of Sierra Leone, Mrs.  Fatima Maada Bio introduced her husband as the key note speaker. She further expressed her gratitude to President Bio for providing such a platform for women to be part of the development process in the country. She thanked him for being a true father to the children of this nation and for providing the free sanitary pads and free quality education for Sierra Leonean girls.

In his statement, President Bio he was very pleased to join the First Lady, development partners and fellow Sierra Leoneans to commemorate the International Menstrual Hygiene Day. He observed that it was another historic opportunity to reflect on the successes and challenges so far and make a firm commitment to the campaign they started together about three years ago. He stated that his Government is eager to work with development partners to continue making hygiene kits available for free to school girls and affordable to women all over the country.

He concluded that he is eager to work with development partners to provide safe and exclusive WASH facilities in all schools that will serve girls so that they assured that even away from home they can  take care of themselves as well. 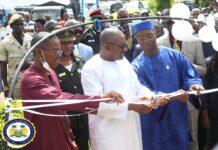 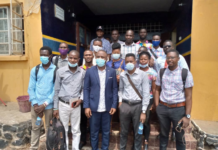