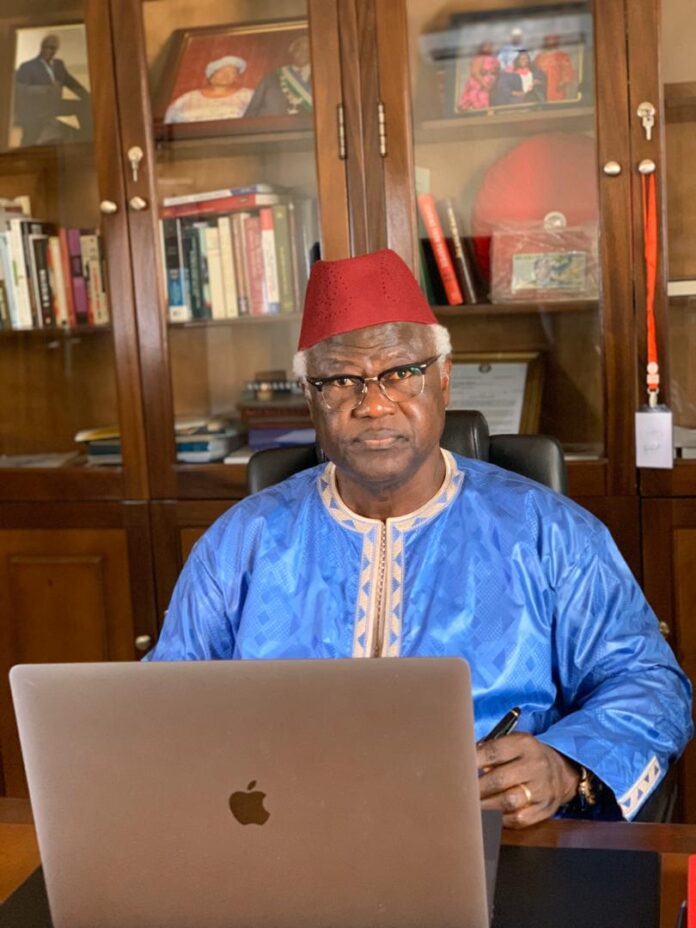 ERNEST KOROMA & OTHERS TO BE VERIFIED

The Biometric Verification of Government Pensioners, Personal Details in Sierra Leone, the National Civil Registration Authority (NCRA) is going ahead with collaboration of the Ministry of Finance and the National Social Security and Insurance Trust (NASSIT) will undertake a Biometric Verification of Government Pensioners whose Personal Details have been provided by NASSIT and the Accountant Generalâ€™s Department.

The purpose of the exercise is to sanitise the Government Pension Payroll in order to make it transparent and accountable. The Verification exercise will be done simultaneously at all NASSIT 33 Pension Pay Points and NCRA Offices across the country. For Pensioners in the Western Area Urban, Verification will be done at the Sierra Leone Police Officersâ€™ Mess, Kingtom Freetown.

The Authority further wishes to inform the general public that this Verification exercise will target all Government Pensioners (Civil/Public servants) that includes:

Sick/bed-ridden Pensioners who might have changed their locations or addresses, are advised to send their Wards/Aids either to the nearest

NASSIT Pay Point and the NCRA Offices in their locations during the exercise to update their contact addresses.

For Military Officers Killed in Action (KIA), beneficiaries/ survivors must come along with their Discharged Books and all other relevantdocuments.

The aforementioned documents should be scanned and sent via email to [email protected] or send hard copy to the Director General, NCRA, 2 Walpole Street Freetown.

– Cancelled Cheque leaf (for those with Current Bank Accounts)

– Retirement Letter from Pensionerâ€™s last institution of work or

All Government Pensioners are encouraged to cooperate with the NCRA in order to have a successful Verification exercise.

Pensioners who fail to present themselves for the Verification may not be considered for inclusion into the cleaned Government Pension Payroll.

â€œThe style of the release, its unusual length, reads like that of students at university flaunting their jingoistic intellectual prowess; and worse, it reeks with that individual and collective egoistic-ism of too many of the Mende-speaking educated elite who dominate in the SLPP â€“ that which non-Mendes do find so irksome.Â

I was bemused and amused after reading the March 31, 2021 â€œPress Statementâ€ by the governing Sierra Leone Peopleâ€™s Party (SLPP), with the pedantic word in its title â€œIncendiarismâ€, accusing the Mayor of Freetown, Her Worship Yvonne Aki-Sawyer, of â€œHate Speechâ€.Â  What triggered my mirth the most were these words in paragraph 3: â€œAfter keenly listening to the five different audios, transcribing the words into English, having our own team of Linguists, Psychologists, Anthropologists, Sociologists, Political Scientists and Security Experts analyse the contentsâ€¦.â€Â  The style of the Release, its unusual length, reads like that ofÂ Â  students at university flaunting their jingoistic intellectual prowess; and worse, it reeks with that individual and collective egoistic-ism of too many of the Mende-speaking educated elite who dominate in the SLPP â€“ that which non-Mendes do find so irksome.Â  If it is a political document, it sure is unlikely to win over new supporters to the SLPP from â€˜the other sideâ€™.Â  Of course, the Release has very strong points against the Mayor â€“ and I hope it can be better put into context and translated into key indigenous languages like Krio, Temne, Mende, Fullah, Limba.

Â â€œâ€¦Psychologists, Anthropologists, Sociologists, Political Scientistsâ€¦â€ How come such a â€œteamâ€ exists, and the economy has been crimping; poverty has been deepening; inflation has been spiking; environmental degradation worseningâ€¦? I now throw a gauntlet down to both the SLPP and the APC. The APC should also come up with their own â€œteamâ€ of psychologists, sociologistsâ€¦.etc.Â  And, both parties that have governed Sierra Leone since Independence in 1961Â  should also include among their teams the â€˜Tiffman-logistsâ€™; and put in the current, and past, commissioners of the Anti-Corruption Commission (ACC) into the mix – to ferret out the many ‘TIFFMAN dem’ in both parties.Â

The SLPP Release metaphorically tries to put the â€œMayor of Freetownâ€ on a therapy couch; in forgetting to bring out the historicity andÂ  the symbolismÂ  of â€œFREETOWNâ€, it is the SLPP that has gone on a therapy couch.Â  Freetown is the capital city (and commercial nerve center) ofÂ  Sierra Leone.Â  The city was founded by British naval Lieutenant John Clarkson, and freedÂ  AmericanÂ  slaves from Nova Scotia (modern Canada) in the late 18th century. â€œFreetownâ€ evolved from the idea pushed by famousÂ  abolitionist, William Wilberforce, to send to Africa freed slaves from the Americas who were roaming the streets of London pathetically poor. The first groups of blacks, about 400 Londoners, arrived in Sierra Leone in 1787, and established â€œGranville Townâ€, named after British abolitionist Granville Sharp; itÂ  later changed to “Freetown”, afterÂ  vicissitudes of attacks from the locals, and malarial attacks.

Yvonne Aki-Sawyer is a descendant of the GREAT SURVIVORSÂ  of the Atlantic Slave Trade who were made to return in the late 18th century to establish â€œFreetownâ€.Â  Most of those (the Mende-speaking elite who dominate the SLPP) putting Aki-Sawyer on a pillory today are likely to be the descendants of those who had captured Negroid slaves and sold them to the white man for over three hundred years!! For cheap rum, tobacco, mirrorsâ€¦.!!Â  But, the â€˜buwahbisiehâ€™ denigration of Mendes by Aki-Sawyer was not a mistake.Â  It was the subconscious articulation of deep-seated resentment ofÂ  many of the Krio elite of the

Mende-educated elite; also the FEAR of many of the Krio elite of competition for government jobs which the Mende-speaking educated elite represent; it was the clear action of the â€˜Krio with the festering slave mentalityâ€™ trying to please her new â€˜slave mastersâ€™, theÂ  Temne-speaking APC elite. Let me explain thatâ€¦..

The first non-Krio Sierra Leonean to become a medical doctor was my violin-playing maternal granduncle, Milton Margai, who in 1926 graduated from the Durham University College of Medicine in the UK. Milton Margaiâ€™s junior brother, Albert Margai, became the first non-Krio lawyer, after reading law at the Inner Temple Innâ€™s of Court in the UK in 1948. Juxtapose that with that of the Krio â€œEasmonâ€ family.

Dr. Raymond SarifEasmon attended the University of Durham in the 1930s; won awards in biology and anatomy; and graduated as a medical doctor at age 23. Easmon’s father, Albert WhiggsEasmon, and uncle, John Farrell Easmon, had qualified as doctors in the 19th century!! Another EASMON, McCormack Charles Farrell Easmon, qualified as a medical doctor at the Medical School of St. Mary’s Hospital in London in 1912. When Dr. Easmon returned to Sierra Leone in 1913, he was refused a post in the West African Medical Service because of his colour. There were then two categories of doctors â€”Europeans in the “colonial service” and Africans in the “local service.” Dr. Easmon, forced into the separate and lower category despite his excellent qualifications, became Country Hospital Native Medical Officer. But he campaigned for years against racial discrimination in the medical service, earning the antipathy of the British authorities who called him the “Yellow Peril.”. It could be that protest to authoritarianism is in the DNA of the EASMON family. Dr. Raymond SarifEasmon – famously known as â€œSarifEasmonâ€ in the early 1970s â€“ was one of the few Sierra Leoneans courageous enough to write against the buddying tyranny of the APC leader, and Prime Minister, Siaka Stevens.Â  His three storey house on Bathurst Street in Freetown was like a shrine for youth who would always point at it as they pass by.

With her pedigree, it is hardly a wonder that Yvonne Aki-Sawyer graduated with Honors in Economics at Fourah Bay College, University of Sierra Leone in 1988. At university, Aki-Sawyerr was active with AIESEC (the International Association of Students in Economics and Management), and she became the first African on AIESEC’s Brussels-based International Exchange Committee in 1988. She earned a Master’s degree in International Relations and Politics of the World Economy at the London School of Economics and Political Science in the 1990s.

Now, let me connect the dots. By about the time of 20th century to the time of the end of the Second World War in 1945, right up to the time of Independence in 1961, the Krio educated elite dominated all spheres of modern life in Sierra Leone â€“ in the civil service; judiciary; engineering; medicine; technical services, etc.Â Â  Between 1964 and 1967, the SLPP Leader, and Prime Minister, Sir. Albert Margai, started chipping away at this Krio absolute dominance â€“ appointing then about 40 years old Peter Tucker, as Secretary to the Prime Minister, and head of the civil service.Â  That angered, and alarmed, the Krio elite. Many of the Krio elite, overtly or covertly, swung their support to the APC, then headed by Siaka Stevens.Â  The Krio intellectual support leading to the 1967 parliamentary election was crucial in whipping up in emotions in Freetown against Albert Margai and the SLPP; and that was a factor which led to the SLPP losing power in 1967 in the â€˜creeping coupâ€™.Â  The Krio elite blossomed for a short while, but, by 1975, Siaka Stevens started shoving them off many key positions in government, to be replaced by his own regional Temne/Limba base.Â  By the 1980s as the economy dipped, the cream of the Krio elite migrated to the United Kingdom and United States in droves.

One profound thing about the Temne-speaking elite who dominate the APC is that since the 1960s they have made it a tradition to always select as candidate for the mayoral position in Freetown a Krio â€“ and the Krio who comprise about 5% of SierraÂ  Leone’s population wouldÂ  win every election in Freetown with about 98% of Temne-speaking people’s vote. Â

The Mende-speaking elite who dominate the SLPP have not been able to measure up to this Temne-speaking sense of remorse for the role their descendants play in the over three hundred years of the Atlantic Slave Trade. The Bio Administration has been trying to measure up to this â€“ as the aforementioned SLPP Release pointed out, both Aki-Sawyerâ€™s father, and engineer brother, have been awarded State House-endorsed government positions. Like with the former president, Ernest Bai Koroma, the current President, Retired Brigadier Maada Bio,Â  has been granting Sierra Leonean passports to African-Americans who have traced their DNA to Sierra Leone, assuring them that Sierra Leone is home.Â  How can Sierra Leone open its hearts to â€˜fresh descendants of slavesâ€™ when they have largely forced into exile the Krios, those descendants of slaves who have been in Sierra Leone for over 200 years?

Underneath the â€˜buwahbissehâ€™ slur of Aki-Sawyer was she singing her â€˜masterâ€™s tuneâ€™ in order to survive in politics â€“ her words were to prove to the Temne-speaking APC elite that she is aÂ  strong fighter AGAINSTÂ  the Mende/SLPP, the central â€˜creedâ€™ of APC thinking.Â Â  The Krio elite in politics have teamed up with the Temne-speaking/APC and Mende-speaking/SLPP to help make Sierra Leone an epitome of a paradox: one of the wealthiest countries in the world in terms of natural resources, yet, yoked with some of the poorest people on earth. And, together, they are rapidly destroying the most beautiful piece of real estate in West Africa, the Freetown Peninsular. The Ignorance embedded in the SLPP/APC is triumphing over Enlightenment. The President has been telling the world that harnessing of human resources is one of his major ambitions. Since the 1970s, APC and SLPP elites have used, and abused, and forced into exile most of the Krio elite â€“ with nuance, the President is being challenged over the Aki-Sawyer saga to reverse that ignoble history. Krios, arise!! ² 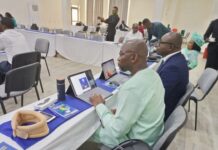 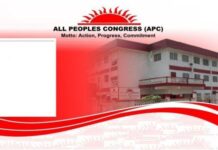 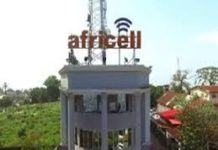